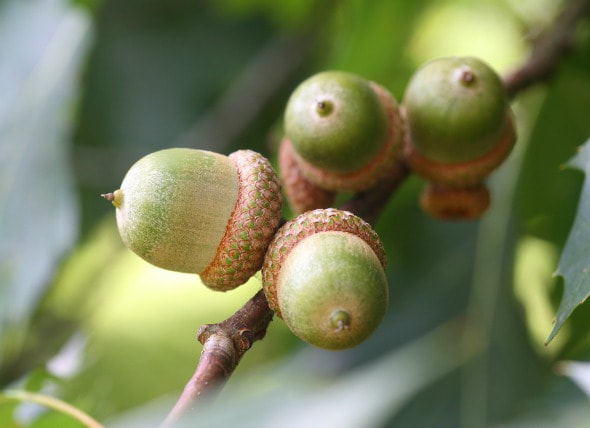 Why are acorns a potential problem for pigs?

Pets rarely consume sufficient quantities to do harm. Many species of oak have been implicated in the poisoning of livestock, with red and black oak exhibiting greater toxicity than white oak. While short-term acute poisoning by oak has been reported, the most commonly encountered oak poisoning is of a chronic nature. Oak is most dangerous early in the spring when the leaves and buds are the highest in toxicity and when there is little else to eat. The fall is another at risk period, when acorns and leaves fall and better forage dies back. Therefore, management plays a key role in preventing oak toxicosis. The toxins in oak are called gallotoxins and are converted in the body to tannic acid, gallic acid and pyrogallol, all of which are very toxic to the kidney. It is the resulting kidney failure that causes the clinical signs. Typically, a significant amount of oak needs to be consumed over a period of time before clinical signs appear. Signs can develop over 2 to 14 days, or signs may be present with the animals becoming progressively worse over many weeks.

The number of animals affected in the herd can vary greatly, but of those showing clinical signs, up to 80% may die. Signs of oak poisoning can include depression, lack of appetite, a gaunt and emaciated appearance, poor or rough hair coat, dependent edema (fluid buildup under the skin under the neck, abdomen or on the legs), digestive disturbances (both diarrhea and constipation have been reported, with mucus covered or tarry stools), increased drinking, passage of copious amounts of urine which may contain blood, and death.

FIRST AID: The most important step is to get the animals back on to plentiful and nutritious feed, and to limit stress, shipping and handling during the recovery period. Also, make sure that plenty of fresh water is always available, since affected animals cannot maintain their own water balance very well while recovering. Since this is a long-term chronic toxicity, there is little in the way of an antidote to relieve signs. Severely or more chronically affected animals may not recover, but the less affected animals may, and may return to previous states of health. A veterinarian will be able to assist in management, and will be able to assist in emergency measures if large amounts of oak were recently consumed. Beyond this, treatment is supportive and symptomatic.

The best way to prevent acorn poisoning is to keep pigs away from acorns. If pastures/yards contain a substantial number of oaks, the trees should either be removed or pigs fenced out, but, if you fence off an area covered with acorns, you may have to leave the fence up for a while. Acorns retain high levels of tannic acid for several months. An alternative would be to set up a management program that will keep pigs off those pastures or out of that particular area of your yard from the time acorns start to fall, until several weeks after the leaves have fallen. Many of us pig parents use extreme measures to safeguard our pigs from acorn toxicity. Many pig parents live in areas with tons of acorn producing trees and have to use yard vacuums to clean them up several times a day.

Eating massive amounts of acorns is also super fattening. It is easy for a pig to gain 10, 20 and even 30 pounds during acorns season. I've read articles from other sources with inaccurate information about acorn toxicity such as "Acorn poisoning is frequently reported in sheep and cattle, and is being diagnosed more often in horses. Tannins in acorns and leaves bind to proteins in the lining of the horse’s digestive tract and the microflora of the gut, causing damage to cells, while toxic metabolites trigger kidney and liver damage. Interestingly, proteins in the saliva of pigs bind to the tannins, thus neutralizing the toxic effect."

Wrong. Pigs are just as "at risk" as other animals. Their salvia does nothing to neutralize the effect of tannins.

Toxic Principle
The tannins found in the leaves, bark, and acorns of most Quercus spp produce poisoning through their effect on the intestinal tract and kidney. Tannins are potent, precipitators (astringents) of cellular protein. Oaks at any stage of growth are poisonous, but are particularly toxic when the leaf and flower buds are just opening in the spring. As the leaves mature they become less toxic. Ripe acorns are less toxic than when green. Ruminants frequently browse on oak without apparent problems provided they have ample access to normal forages.

Gastrointestinal
Initially animals stop eating, become depressed, and develop intestinal stasis. The feces are hard and dark but a black tarry diarrhea often occurs later in the course of poisoning. Abdominal pain is evidenced by teeth grinding and a hunched back.

Treatment
Once clinical signs are evident, renal damage is severe warranting a poor prognosis. Aggressive fluid therapy may help to rehydrate the animal and maintain kidney function. Supplementing cattle with 10% calcium hydroxide is useful in reducing oak toxicity in areas where oak brush is likely to be consumed in quantity.

Hepatic System
Severe liver damage is detectable by marked elevations in serum liver enzymes. Animals may live for 5-7 days after the onset of clinical signs.

Diagnosis
A mucoid, hemorrhagic gastroenteritis is a common finding in oak poisoning. Hemorrhages on various organs and excessive amounts of fluid in the peritoneal and pleural spaces are often present. The kidneys are usually found to be pale swollen and covered with small hemorrhages. Histologically the kidneys show tubular necrosis. Liver necrosis may also be evident.

Special Notes
Oak poisoning often occurs in the early spring when a late snow will cover the ground and cattle then browse on the oak buds that are leafing-out. Other oak species that have been associated with oak brush poisoning include Q. undulata, Q. turbinella. Oak trees make excellent shade trees when mature, and ideally should be planted outside animal enclosures. In years when there is a heavy acorn crop, fallen acorns should be raked up and removed from areas where animals have access and tend to root around looking for food.