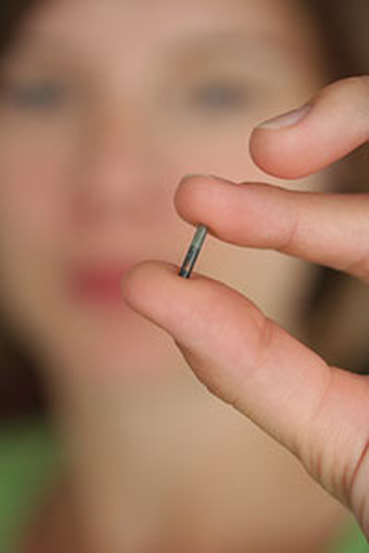 Should I Microchip My Pig?

What is the purpose in microchipping a pet pig?

A microchip is about the size of a grain of rice. It holds electronic data that can reliably verify a pig’s identity, whether a pig is lost or during emergencies like natural disasters, when it can be key to returning a lost pig to their family.

The objectives of an effective system of electronic identification of animals are to:            • Travel (international and domestic)
• Certificates of Health Inspection
• Identification of specific animals such as breeding animals, competition animals, animals where legislation mandates  permanent identification (e.g., an animal adjudicated to be a "dangerous individual")

Scanning animals for microchips is necessary for the identification system to be effective. Therefore, every companion pig, dog, cat, other small mammal, bird, fish, reptile, amphibian, and equid presented to a veterinarian should be scanned, whenever possible, for the presence of a microchip. The veterinarian, or designated staff, should scan the animal and note in the patient's medical record if a microchip is present, and if so, record the microchip number in the patient's medical record. This routine scanning for a microchip not only aids in the positive identification of an animal, but also provides the opportunity to assess if the microchip is still functioning properly and located appropriately, as well as reminding owners to keep their microchip database contact information current. If a microchip implant is detected of which the client is not aware, the veterinarian, or designated staff, should inform the client of this fact, provide the client with contact information for the microchip database company, and encourage the client to contact that company. The veterinarian should document in the patient's medical record that he or she spoke to the client about these matters and should consider contacting the microchip database company with the client’s permission. The veterinarian is not expected to investigate nor resolve ownership disputes over an animal, nor should a veterinarian be held liable for relying on a client's claim of ownership following scanning.

A microchip will not guarantee that a lost pet will be returned, but a microchip can assist in helping reunite pets and their families when protocols are followed. Should your pig be picked up by animal control, they should scan for a microchip and as long as the contact information is up to date, you should be notified that your lost pig has been found. The same thing applies if your pig is picked up by a person, should that person take your pig to animal control or the vet, a simple scan will tell them who the family is that the pig belongs to. If there isn't currently a way to "alert" a veterinarian or animal control that a pet is missing when scanned, I am quite sure that technology isn't far away. For now, due diligence and microchip your pig.
​
A veterinarian is expected to exercise his or her professional judgment on ownership before establishing a Veterinarian-Client-Patient Relationship (VCPR). In those circumstances that raise suspicion that the presenting person may not actually be the lawful owner of the animal, a veterinarian should ask for documentation of ownership, such as governmental registration, bill of sale, adoption documents, or microchip documentation. Documentation of ownership should be required when a client requests that a veterinarian remove a microchip. Where the veterinarian has cause to believe that ownership of the animal is unclear, the veterinarian should postpone treatment until evidence of ownership is presented unless, in the judgment of the veterinarian, the treatment is necessary to maintain the health of the animal, to preserve its life, or protect public health. The detection of a microchip implant of which the client is unaware may raise suspicion but should not be considered, in and of itself, sufficient evidence that the client is not the lawful owner. In such a case, a veterinarian may proceed with treatment. In the situation where an animal that has a microchip is found and brought to a veterinarian with no claim of ownership, the veterinarian should contact the microchip database company to locate the owner of record. If unsuccessful, the proper animal control authority should then be contacted for assistance, consistent with any local ordinance.
Animal Microchip Types and Frequencies

​Implantable microchips are cylindrical devices that are implanted in the subcutaneous tissues using a hypodermic needle. These devices contain four components: a capacitor, antenna, connecting wire and a covering. The devices are battery-free and sealed in biocompatible glass covered by a sheath to prevent migration. Microchips are activated by a low-power radiofrequency signal emitted by scanners; electromagnetic induction generates electricity in the antenna and transmits the information stored in the microchip. When activated by the scanner, the microchip transmits a unique, preprogrammed identification number.

Microchips are produced by various manufacturers within the U.S. and other countries. The metal composition of the microchip varies among manufacturers, and may consist of ferrite, titanium, or other metals. The microchip surface materials are usually bioglass (biocompatible glass) or bioglass coated with different polymers. Radio Frequency Identification Device (RFID) microchips are implanted in animals.

Differences in animal microchip frequency in the US have led to controversy and several civil lawsuits. There is no agreed-upon "American standard" for microchip frequencies. The American National Standards Institute (ANSI) voted in favor of the current International Standards Organization (ISO) Standards both at the time of initial adoption in 1996 and at the time of their mandatory 5-year review in 2001 and 2006. In its August 2006 report to USDA, the Equine Species Working Group urged use of the ISO standard for identification of equine species, as well as the development of ISO-compliant scanners that are also able to read, or at least detect, 125-kHz microchips.

The ISO standards 11784/11785 were implemented in 1996. They are accepted by Canada, Europe, Asia, and Australia, and have been endorsed for use in the United States by the American National Standards Institute (ANSI). ISO standard 11784 defines the structure of the microchip information content, and standard 11785 determines the protocol for scanner-microchip communication.  The standards include the assignment of a 15-digit numeric identification code to each microchip: 3 digits of the identification number designate either the 3-digit country code of the country in which the animal was implanted (The Country code is used only if there is a central, national database that takes on the responsibility of administering number allocation and ensuring no number duplication) or the 3-digit manufacturers code (as assigned by the International Committee on Animal Recording [ICAR]) if there is no central, national database, to ensure number uniqueness; 1 digit denotes the animal's category (optional); and the remaining 8- or 9-digits denotes a unique animal identification number. In 2005, a dog was reunited with its owner in Toronto, Canada after its ISO microchip number was traced to its original registration in Portugal.10 Non-ISO standard (125- or 128-kHz) microchips contain 9 or 10 digits and do not include a country code. Manufacturer codes are assigned by ICAR following an application and review process that includes signing a "code of conduct." A list of Manufacturer Codes can be found at on the ICAR site.

​Microchip frequently asked questions are addressed in the file below. A 2nd FAQ packet was put together and is also included here on our website.

Photo credit: Avid Friend Chip
This is an example of one brand of microchip. It comes loaded in a syringe, your vet will inject the microchip under the skin, typically behind the ear and you will register your pig with whatever company's microchip your vet uses. Ask your vet if they register first, because some prefer to be in charge of the paperwork and information, but you should get a record of the microchip number and the information submitted to the company. If you change your phone number or address, this needs to be a priority in notifying the microchip company of these changes so you are able to be reached should your pig go missing. Microchipping is a relatively painless injection/procedure, but microchips are responsible for many many pets finding their way home. Definitely something to consider. It can be implanted while your pig is anesthetized for spay/neuter or other procedures as well. The cost is typically minimal, but you can't put a price on peace of mind. Talk to your vet about microchipping.

What to do if YOUR pig is missing... 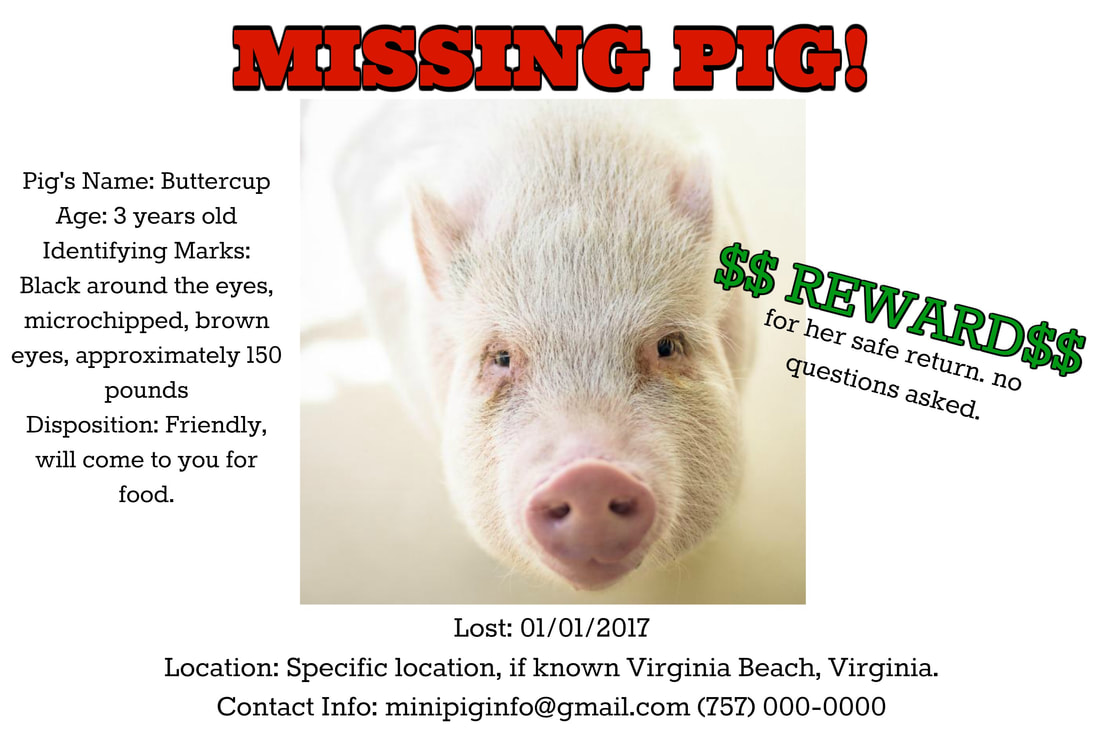 Let us/someone know. Get some information together and send it to us or others in the mini pig community. Networking can sometimes be exceptionally helpful in helping to reunite lost or missing pigs with their families. We also have a social media page that was created for this sole purpose and we can create the flyer for you, we just need the facts to create it. Feel free to email us, message us on Facebook on either our Mini Pig Info page or Lost & Found Pig page. The sooner your flyer starts getting shared, the sooner your lost pig can be networked to find his or her way back home. We will do everything in our power to help a lost pig be reunited with their family and have had a lot of success.
Next Page