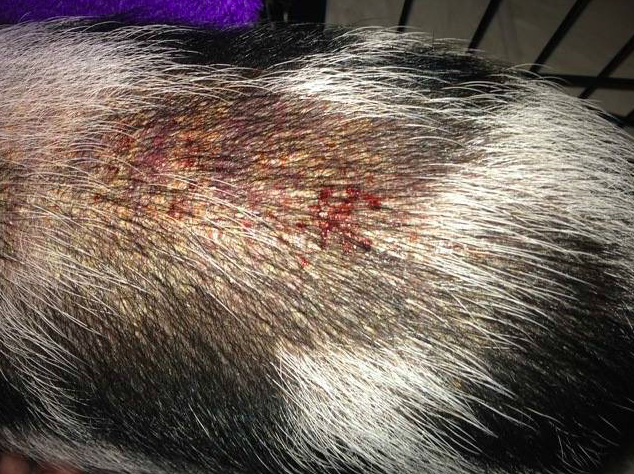 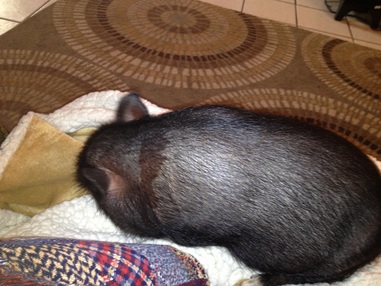 Dippity Pig Syndrome can present differently in different pigs. It may present differently in the same pig at another time.
Dippity pig syndrome, also often used interchangeably with "Erythema Multiforme" or bleeding back, is a neurological disorder, but, not all pigs get it. Dippity is probably the most frightening thing most pig owners ever see. It's often prevalent in the spring time, but can be seen any time of the year. Dippity can be exacerbated by the sun/sunburn, stress; such as a violent thunderstorm, a trip to the vet, deviating from the normal routine or other things like moving furniture, having guests over, etc. It is not clear whether the stress is internal or external or whether it can be self-induced. Examples of external stress could be a sudden deviation in normal routine or excessive sunlight, internal stress could include dehydration or drastic changes in body temperature due to climate or other illness. There really is no specific treatment, but rather pain control and no preventative treatment either. (However, if sunburn or excessive sun is the trigger, using sunscreen can help lessen the chances of your pig getting dippity pig syndrome) Most often, the pigs affected are under 2 years old although there have been reports of pigs older than 2 years old getting it too. This illness appears suddenly and most times an area of "weeping" blister like sores are seen (usually the actual moisture is what is seen, it resembles a wet spot on the side or back), typically these lesions run side to side, not head to tail usually starting near the rump (butt area) or midway on the back and move towards the head and these lesions can form in a matter of minutes. An example of a common situation when dippity has been positively diagnosed: A young or baby pig who was fine last night that gets up in the morning with long “gashes” across his back and when he trying to walk his hindquarters just seem made of rubber and he almost falls, “dipping” down to the floor with his belly. He hurts and cries out if you touch him and the gashes ooze a reddish fluid of thinly diluted blood (serum). This was actually what happened to one pig parent who reached out to us on our Facebook page. We also have a video near the bottom of the page that shows a pig with classic symptoms of dippity who was also positively diagnosed with this illness.

The overall symptoms vary from pig to pig, some have all the classic signs, some only have one or two. Some of the symptoms include: a sensitivity to being touched around the back end of the pig sometimes to the point that the pig squeals when touched a “hunkered-down” stance with the tail tucked between the back legs and clamped to the body, weakness of and/or inability to use the back legs to the point of falling down pain, restlessness, and distress. Some pigs can take a few steps before their legs seem to give out causing them to fall or stop walking. This condition is very painful for pigs and because they often "dip" down when you pet the back the unofficial name given to this disorder has been dippity pig syndrome. The onset is very sudden and leaves just as mysteriously/abrupt. The typical timeframe is 48-72 hours. It is both scary and heartbreaking to see a pig with dippity, and once a pig gets it, they are prone to get it again. (the video below shows a pig with dippity pig syndrome) Sometimes people think their pig was the victim of a predator attack, while sometimes this may be the case, usually, it is a case of dippity pig syndrome. All other diseases need to be ruled out, because there are some that resemble the symptoms of dippity, so look for the weeping areas on the back and sudden onset along with the "dipping" when you touch the back to point towards a positive case of dippity pig syndrome. Do diligence by checking your pig for a fever and making notes on any recent injuries or falls. Some other serious illnesses can cause neurological symptoms that are similar such as meningitis and paralysis of the rear end can indicate a spinal or back injury. (You can click here to read more about paralysis in pigs and how to handle that.) Pigs can slip on a tiled floor or one they cannot seem to get traction on and fall resulting in a spinal or back injury. Since pigs and steps don't seem to be a great combination, there have been several cases of pigs falling down a few steps also resulting in a back or spinal injury.

**Please check with your vet before giving your pig any medications**

Assuming there has been no recent surgeries, enteric coated baby aspirin (5mg per lb of body weight, this comes in 81mg/baby aspirin and 325mg full strength) or children's Tylenol, 5mg per pound (160mg per 5ml is the usual concentration, the actual dose is 1ml per 6 lbs of pig) either one can be given every 8 hours as needed for pain for 3 days with food. Do NOT give both medications at the same time, you can choose one or the other. You can also give Benadryl to help them rest, that dose is 1mg per lb (the normal pill comes in 25mg tabs) and the total dose should not exceed 75mg no matter how much your pig weighs. The most important thing you can do for your piggies if dippity strikes, is to immediately reduce stress, both internal and external. You can help control the symptoms by placing the pig in a dark quiet room set to an appropriate temperature for that time of the year. A dark, quiet area does a lot to soothe and calm a pig, You can also play soft music as this has been proven to help calm a stressed pig as well. Keep your pig hydrated during this time, and reassure and comfort your pig often. We know these things help. Because of the short life of the disease and the fact that it goes away on its own without any intervention, there hasn't been a lot of research done to determine if there is any kind of treatment that truly helps. What we do know is that this illness is painful, and this is why pain meds are recommended, but again, please don't medicate your pig unless you've cleared it with your vet. Some will also use cream on the affected areas, if lesions are present, liquid vitamin E or aloe vera gel are soothing and healing. Some vets prescribe topical 1% hydrocortisone cream. Consult your veterinarian as to the appropriateness of drugs to alleviate discomfort or pain. If you're not seeing any weeping sores (and not all present with the same symptoms) and there is no "dipping", it's likely not dippity, especially if your piggy isn't having any difficulty walking/standing either. These symptoms are what helps to draw the conclusion that it's dippity. Dippity is usually pretty easy to spot, other diseases aren't, so if you're not sure that your pig has dippity pig syndrome, call your vet.  If you don't see any of these symptoms or only one, I personally, would call a vet. Does your pig have a temperature? Eating, drinking, peeing and pooping ok? What are the symptoms your pig is having?  Any behavioral changes? Lethargic? Answering those questions would better help in finding out possible problems with your pig. Pigs can have various injuries resembling dippity pig syndrome and although dippity isn't life threatening, some of the other possibilities can be....

It is much easier to spot Dippity on a dark pigmented pig, often it presents like a wet spot, other times it will look like drainage from the back. Sometimes there are no lesions there, other times the lesions show up hours after the symptoms begin. Each pig is different and each will present different. Always call your vet if you are unsure. Below are all examples of this acute illness in various pigs that have been shared with us. 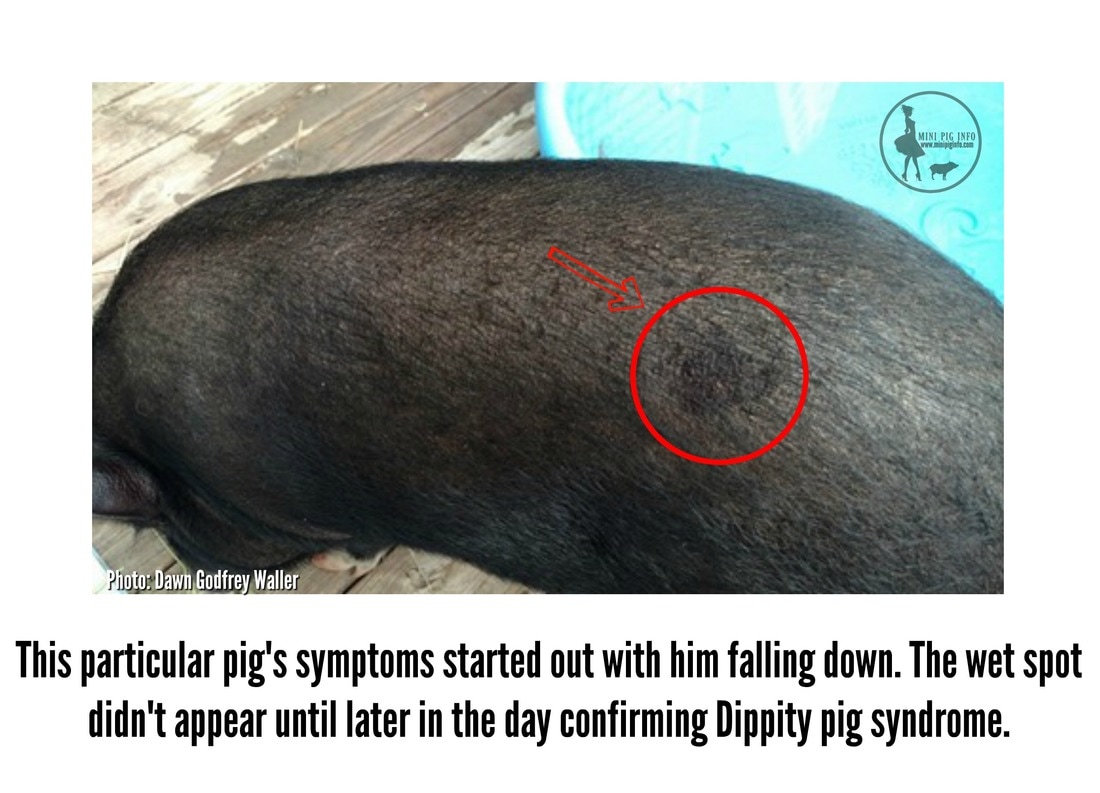 This is a pig with Dippity. Thanks to Emily Anderson for allowing us to share your video. Each pig may present differently, some may have all the classic signs while others may have only the pain, or only the lesions or a combo of everything. It's the symptoms collectively that will determine if your pig has a case of Dippity. Be sure to use our health form to help you rule out other illnesses. Dippity should not affect eating, drinking, peeing or pooping and there should not be a fever associated with it.