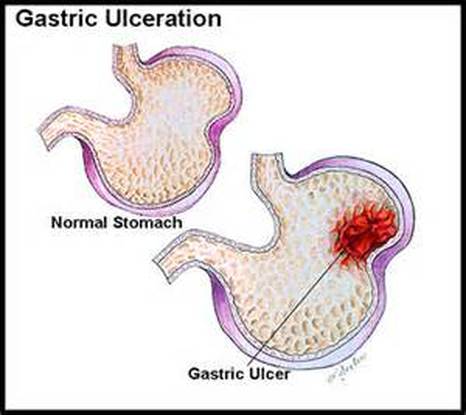 Gastric ulceration in mini pigs: Are pigs at risk?

Ulcers affect the pars esophagea in pigs and cause sporadic cases of acute gastric hemorrhage, resulting in death or slow growth due to chronic ulceration. Pigs are super prone to ulcers in general. Ulcers can be a silent killer of pigs. Some pigs appear ok and the only sign that something is wrong is death. Read below to see causes, treatment, preventive measures and more about ulcer in pigs.

Etiology- Ulcers result when the unprotected stratified squamous epithelium of the pars esophagea is subjected to insult from the mixture of acid, bile, and digestive enzymes present in the distal region of the stomach. The mucosa that surrounds the esophageal opening is not protected by mucus and therefore relies on maintenance of a pH gradient between the proximal and distal regions of the pig stomach. Many risk factors are associated with the development of ulcers, most of which are associated with an increase in fluidity of the stomach contents. The most important of these factors relate to feed, particularly the use of finely ground feed (<700 microns average particle size). Consumption of finely ground pelleted feed results in rapid stomach transit time and fluid stomach content. Other important factors tend to be associated with disruption in feed intake, eg, an outbreak of respiratory disease, hot weather, or management errors that lead to empty feeders. Disruption in feed intake results again in fluid stomach contents and lack of a physical barrier between the acidic distal contents and the sensitive pars esophageal region. It is possible that factors that cause increased acid production may influence the prevalence and severity of ulcers, but in general there is little evidence that hyperacidity is a primary cause. Similarly, Helicobacter-like organisms can often be identified under the mucus on the surface of the glandular mucosa of the distal stomach, but evidence that these bacteria are a cause of ulcer development in the pars esophagea is lacking, and epidemiologic studies showing an association are inconsistent. The presence of the bacteria in the glandular region and the lesion in the pars esophagea is difficult to explain from a biological standpoint. There are times when the ulceration is due to use of medications as well. Please follow all dosing and medication instructions when your pig is prescribed meds of any kind such as give with food or give on an empty stomach.  Ask you vet if you should give something for ulcer prevention in addition.

Clinical Findings- Sudden death usually involving only a small number of pigs in a grower-finisher barn is a common presentation, but higher numbers can occur sporadically and are usually associated with a triggering event such as feed disruption. Death is caused by acute hemorrhage from the ulcer into the stomach, so the carcass appears notably pale but generally in good body condition. If bleeding is less severe, the clinical signs are those associated with anemia, such as paleness; if bleeding is prolonged, the pig will become weak, lose body condition, and grow slower than its pen-mates. Scant amounts of black tarry feces indicating digested blood may be noted. Vomiting may be seen but diarrhea is generally not present, which helps to differentiate gastric ulceration from other conditions. Other causes of blood loss or anemia need to be excluded. The most common age group to show clinical signs are pigs 2–6 mo old, as well as sows. Most pigs reared in modern confinement systems develop lesions in the pars esophagea. Lesions can both develop and heal quickly. This makes it difficult to determine whether erosions of the pars esophageal mucosa cause slow growth rate if blood loss is minimal and anemia is not present. Scarring can occur and, if severe, can result in narrowing of the esophageal-gastric opening. Clinical signs of esophageal stenosis include regurgitation of a meal shortly after consumption and loss of body condition.

Signals: (when these are new behaviors)
Lesions- Gastric ulcers in pigs involve the mucosa near the esophageal opening in a rectangular area of white, glistening, nonglandular, squamous epithelium. In a pig that has died suddenly from a gastric ulcer, it is common to find a crater ≥2.5–5 cm in diameter encompassing the entrance of the esophagus. The crater appears as a cream or gray, punched-out area and may contain blood clots or debris. In acute hemorrhage, the stomach and upper small intestine contain dark blood. Earlier lesions are characterized by hyperkeratosis and parakeratosis of the squamous epithelium in the area of the esophageal opening into the stomach. It is assumed that the thickening of the epithelial surface is a defense against insult. Cracks and erosions can occur, particularly near the pars esophageal border. A deep erosion may result in acute and severe blood loss even while most of the surface of the pars esophagea remains intact. The healed ulcer appears as a stellate scar. Erosion and healing may occur over and over. Severe scarring can create stenosis of the esophageal opening.

Diagnosis- Appearance in a pen of one or two listless, anorectic pigs that show weight loss, anemia, dark feces, and sometimes dyspnea is suggestive of gastric ulceration, as is the sudden death of an apparently healthy pig. Differential diagnoses include hemorrhagic bowel syndrome, porcine proliferative enteropathy (Lawsonia intracellularis infection), porcine circovirus-associated disease (PCVAD), and swine dysentery. Gross lesions at necropsy are usually sufficient to confirm a diagnosis of gastric ulceration. Abattoir examination has been used to evaluate the prevalence of stomach lesions but must be interpreted with caution. Pigs are generally held without feed before shipping and may be held overnight at the packing plant before slaughter, and during this time ulcers can form or become more severe. On an individual animal basis, possibly for a valuable breeding boar or a pet, an endoscopic examination could readily identify a gastric ulcer.

Treatment and Prevention- No economically feasible treatments are currently available for commercial swine. For pet pigs or very valuable breeding animals, proton-pump inhibitors have been shown to reduce gastric acidity and allow mucosal healing. For commercial swine production, weak, pale pigs in poor body condition should be euthanized, and milder cases might respond to palliative care. Placing the affected pig in a hospital pen and initially coaxing it to eat using a highly palatable feed, and possibly administering analgesics, can be attempted. Early marketing of affected pigs should be considered. Normal treatment also includes taking them off all grains and substitute fruits and veggies only. Be sure to give lots of them, as lack of food in the stomach causes ulcers by itself. It takes approximately 4 cups of fresh vegetables and fruits to replace 1 cup of pellets.

Preventing, or reducing the incidence of gastric ulcers should focus on maintaining good feed intake, including management steps such as ensuring feeders do not run out of feed, sufficient feeder space is available, and mixing of pigs is minimized. During hot weather, it is important to make the pigs as comfortable as possible using cooling methods such as water spraying or high ventilation rates. Vaccination and other steps to minimize respiratory and systemic diseases are important to prevent gastric ulcer deaths. Attention to feed milling practices has a major impact on reducing ulcers. Feed produced using a roller mill is regarded to be less ulcerogenic than feed made with a hammer mill. Fine particle size is associated with more likelihood of ulcers but is also associated with improved feed efficiency, so economic considerations must be understood before a drastic change in particle size is recommended. In general, a coarse feed that will protect pigs from stomach lesions may not be an acceptable solution because of the added feed cost, but in an outbreak situation a short-term feed change may be necessary. There are over the counter medications that have been proven to be effective when used in pigs, but you will need to check with your veterinarian to determine if this is appropriate for your pig.

Ulcers, untreated, can kill without a visibly sick pig, just a bit shy or not too hungry every day, then you find them dead. Necropsy will show the ulcers. Treating a suspected ulcer is not harmful even if they don’t have one. But treating for ulcers if there are other symptoms that may indicate kidney failure would be treating symptoms and not disease. The vet will determine when additional diagnostics may be needed and/or if an ulcer is a primary illness or a secondary effect from another illness/disease.

Gastric ulceration:
Predisposing factors include chronic stress, insufficient fiber and finely ground feed. Perforating ulcers may lead to severe peritonitis and death. Ulcers can also cause severe anemia with due to hemorrhage and a fecal occult blood test should be performed. Less severe cases result in appetite loss and abdominal pain. Pyelonephritis should be excluded as a differential diagnosis.

Treatment include antimicrobials and gastric acid pump inhibitors such as Omeprazole which bind irreversibly to gastric parietal cell’s H+, K+, ATPase enzyme which pumps hydrogen ions into the lumen of the stomach in exchange for potassium ions. Gastric acid secretion only resumes after new H+, K+, ATPase enzyme is synthesized in the parietal cells. Oral paste can be used in the absence of vomiting at 4mg/kg orally or the intravenous product at 0.5-1.0 mg/kg once dail
Next Page