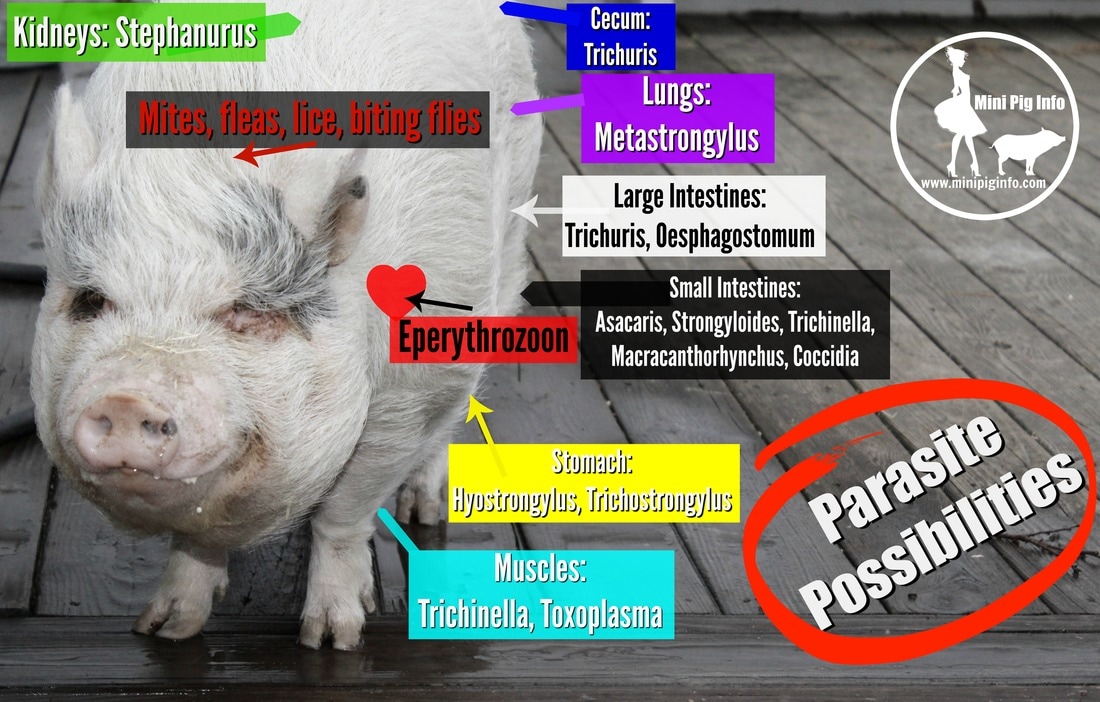 Pigs can and do get parasites, including worms. Ivermectin is used to treat mange mites (scabies), lice, roundworms, lungworms, threadworms in swine. Fenbendazole treats tapeworms, whipworms, roundworms and hookworms. Swine performance is influenced by internal parasites, most dramatically in the young, growing pig. Parasites reside in the stomach and intestinal tract of the pig, and can cause irritation, impaction, indigestion and lack of appetite. Parasites cause loss of nutrients from feed consumed by competing with the host, and by causing poor digestion, gut ulceration and even blood loss can occur. Even small numbers of the large roundworm (Ascaris suum) can depress feed intake and daily weight gain and cause a depression in gain : feed ratio. Some worm parasites may be found in the lungs, where they interfere with respiration. This in turn may result in pneumonia. Below is Cathy Zolicani's (DVM), dosing recommendations for these preventive medications. Ask your vet how often they'd like your pig treated or establish a regular fecal test regimen to detect the presence of parasites, most notably, worms. Pigs should be dewormed if there is a positive fecal test or exposure to a pig with known parasites. Some vets may have you treat more than Cathy, DVM recommends based on your particular circumstances. Each medication has separate doses and their own time frame in which they need to be given in order to be effective and treat the parasite efficiently. Both of these medications are safe and effective, both can be used in pregnant pigs, but neither is recommended in piglets under 6 weeks of age. As stated earlier in the paragraph, when a pig is infected with parasites, they have the potential to not growing properly, their nutritional status isn't adequate because they have a parasite not allowing the essential vitamins and minerals to be absorbed as they would in a pig without parasites. Often times, pigs that have an infestation of worms, will have a bloated belly and won't be able to gain a lot of weight. Malnutrition can be a serious issue if this isn't addressed. These parasites are common in the pigs environment, especially those that root, graze or spend time outdoors. They can contract parasites from soil, grazing, other pets, other pigs, eating bugs (including earth worms or mealworms), contact with hay, even if pig parents have horses, work in a barn or come into contact with other species that can host these parasites, they could possibly bring parasites to their indoor pigs. Most of these parasites will show no symptoms until after they have taken a toll on your pig's health. Many of the parasites will not show up on a fecal exam especially if they have invaded organ systems as some do, but it's still recommended that you have your pig tested rather than give anti-parasite medications regularly because pigs will build up a tolerance to these medications which will render them ineffective. If a pig has mange, they tend to turn an orange color (not to be confused with pig rust, which is often found on "pink" pigs and will be discussed in another area on the website) and constantly scratch on anything they can get close enough to rub against often leaving scrapes and raw areas all over their body. These are classic signs of worms and mites, but every pig is different and will present with different clinical signs, please see the classic symptoms below.

Possible types of worms based on symptoms:
Coughing - consider lungworm but only if the environment could give access to earth worms or beetles. Ascarid larvae as they migrate through the lungs can increase the incidence of pneumonia and coughing.
Wasting - round worms, coccidia, kidney worms or Balantidium coli.
Blood in the urine-kidney worms.
Blood in the feces-coccidiosis, trichuris infection.
Anemic pigs - stomach worms

With a small syringe, dose 0.2 cc or ml per 10 pounds (or 1cc for every 50lbs) of body weight to mix with pig's food. Your pig will need 2 doses, 14 days apart.  Repeat these 2 doses every 4-6 months if your pig grazes, lives outdoors or is exposed to other pigs. This bottle will cost between $40-50 dollars, but will last years in a normal pet pig household. Make sure you check the expiration date on purchase and make a note of when it expires. Typically this is 2 years after purchase.

The injectible formula tastes bitter given orally so mix with food to cover the taste. This will ensure a stress free deworming, the pigs think they're getting a special treat. Mix with yogurt, canned pumpkin, apple sauce or squirt into a piece of bread, Oreo cookie, into a strawberry, grape or spongy type food that can absorb the liquid. This medication can be used in pregnant pigs, but its not recommended for piglets under 6 weeks old.

Fenbendazole – for tapeworms,whipworms, ascarids.  DOES NOT treatmites or lice.
Use safeguard for goats, 10% suspension (100 mg/ml)  (brand name Safe-guard)– for tapeworms, whipworms, ascarids but does not treat mites or lice. Therefore, this is an excellent addition to Ivermectin but should not replace it. Dosing with this oral suspension is easy. This should be used in combination with Ivermectin to ensure ALL parasites are eliminated.

Mix 0.1 ml or cc per 10 lbs of body weight, mixed into food such as canned pumpkin or yogurt. This dose should be given once a day for three days in a row. If worms are suspected, repeat the 3 day dosing two weeks after the first dosing. Regular schedule for Fenbendazole is every 4-6 months. This medication can be used in pregnant pigs but it's not recommended for piglets under 6 weeks.

**If your pig has never been "dewormed", the pig is new to the household or its been more than 6 months since the last treatment, you can give the Ivermectin as instructed above or take a stool sample to the vet for testing. Remember, not all worms are detectable in the feces, so although the fecal test may be negative, your pig can still have parasites/worms. If your pig is super itchy or has the mangey orangish/red color skin (that doesn't wash off), odds are your pig has sarcoptic mange and needs to be treated. Your vet can take a skin scraping and test for the prescense of these parasites, or you can treat proactively. Mites are not insects, instead, they're more closely related to spiders and are microscopic, so you can't see them with the naked eye. The female burrows in the skin leaving a trail of eggs behind her. these eggs hatch in 3-10 days and the cycle repeats itself over and over again. Mites prefer hairless skin and thus the ear flaps, elbows and abdomen are at highest risk for the red, scaly itchy skin that characterizes sarcoptic mange. It also be misdiagnosed and lead you down the wrong path assuming there is an allergy due to the body's natural response to an allergen. It can be passed along to humans in the form of scabies, but it tends not to persist on these hosts. They usually go away on their own in humans because we do not make an ideal host for them to complete their life cycle, however, they are extremely itchy if/when they are present. Your primary care doctor can prescribe a cream to help with the eradication of the mites on you faster. (Just be sure to tell your family doctor that you have a pig who has or possibly has mange)

If you'd like to read more on potential worms, here's a link regarding the different types of common worms in swine.
http://www.morrisvetcenter.com/morrisvet/Livestock/Swine-parasites.asp
http://extension.missouri.edu/p/G2430

Although rare, you can overdose your pig using these medications. When Ivermectin is given in high enough doses, it can cross the blood-brain barrier and cause neurologic signs in dogs, including weakness or paralysis of one or more limbs, balance disorders, vision disorders, pain, and seizures.
Ivermectin toxicity can occur whether the drug is given orally, topically (applied to the skin) or parenterally (by IV or injection).
There are very few overdose warnings for the Fenbendazole, it is overall a safe medication.

How to measure medications for mini pigs using a syringe 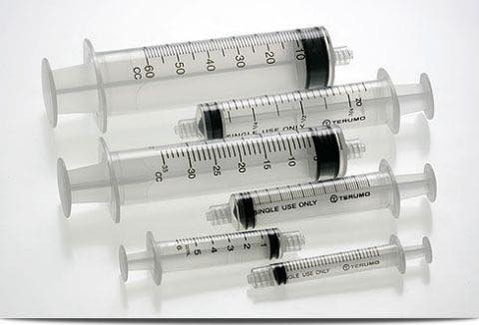 ​These are all common syringes, as you can see, they come in many different sizes. Typically, a 2.5cc or 5cc syringe is what you will need. Smaller pigs may need a more precise syringe like a 1cc syringe so the dose will be super accurate. These syringes are usually less than a dollar at feed stores, so you can buy a couple of different sizes to suit your needs. Don't ever hesitate to ask someone else for help, not everyone has a medical background and knows how to read a syringe. Again, in each syringe, the lines in between the big numbers represent something different. In a 3ml syringe, each line typically represents 0.2ml, but in the 2.5cc syringe pictured above, each line represented 0.1ml. So, you have to determine what each line represents before drawing up the medication into the syringe. 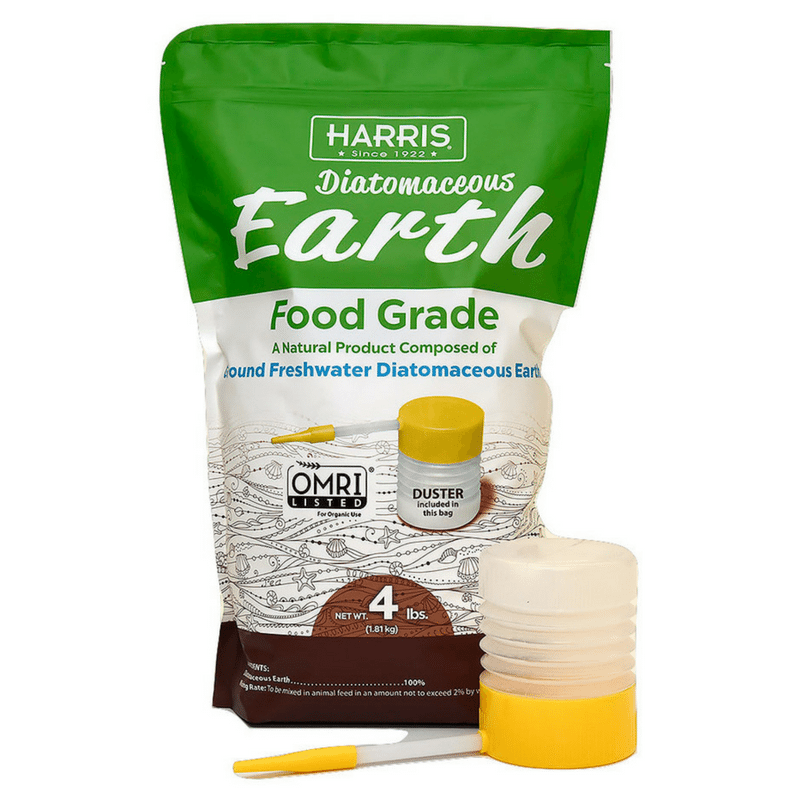 A lot of people swear by DE, however, DE should NOT be used alone to treat parasites in your pig; it can be used in combination though. DE (food grade) can be sprinkled in your yard to help control insects/ticks/fleas but you should not use this as a primary defense against parasites in pigs. Here is the DE website info about the uses of food grade diatomaceous earth for consumption in general, for people, as well as pets. Do NOT use anything other than food grade in any area your pig has access to.

Industrial grade D.E is primarily used as a filter in swimming pools and fish tanks. Businesses in the mining or construction industries also use industrial grade D.E to stabilize nitroglycerin, although no human will ever need to use D.E for this – at least personally.

The bottom line is Food Grade D.E. is for pest control, human consumption, and as an insecticide. Farmers can also use food grade D.E as an anti-caking agent on livestock feed in lesser concentrations. Industrial use is mainly to act as a filtering agent for a swimming pool or for a tank. In some cases, farmers may spread industrial grade D.E over a large field to prevent disease and parasites from overtaking soil before planting crops.

Using the wrong grade of D.E can negatively impact a human or animal’s health, so pay attention to which grade of diatomaceous earth you buy when at the store or online.

Food grade DE is still strong enough to dry out the skin and cause irritations in the esophagus. Therefore, it is still a good idea to wear gloves and a mask if using food grade DE to remove pests from a garden or on a pet.

Diatomaceous Earth Consumption
Food grade D.E is the only type of DE safe for consumption. It is recommended humans start with a small dose around one teaspoon and eventually work up to a tablespoon. This is so the body can become familiarized with diatomaceous earth.
It is not recommended that humans consume more than three tablespoons per day although excess diatomaceous earth is removed without really any effects on the body.

Once again, industrial grade D.E has a high concentration of silica and can cause severe effects on the body. This is why it is vital humans handle industrial grade D.E. with care and only consume Human Grade or Food Grade Diatomaceous Earth like SilaLive.