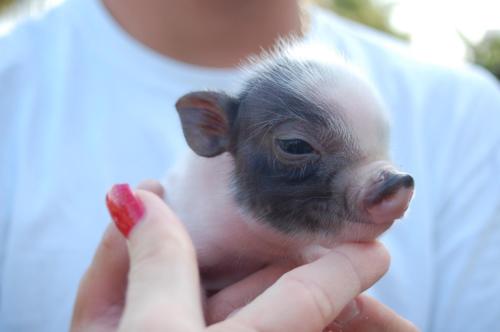 THIS is a piglet, probably only days old. Note the peach fuzz type hair.

How to estimate the age of a pig

You can look at a tree that has been cut down and count the rings to determine how long that tree has been there. Each ring represents a number of years and by simple addition, you can quickly estimate the age of a tree. Pigs do not have rings, so you have to rely on other details to help you determine the age of a pig. Pigs age at a rate of 5 years to every human year. So a pig that is 2 years old is equivalent to a 10 year old human. It can be difficult to determine the age of a mature pot-bellied pig. There is no one clear age indicator, instead, it's a matter of looking at all the characteristics and behaviors and making an educated guess. The usual groups are the juveniles, which is piglets up to 2 years old, the young adults, which are the pigs around 3-7 years old, the mature adults, ages 8-12, the seniors, ages 13-15 and the elders which are 16+ years old. I believe this to be most important to those who are getting a piglet from someone, whether that be from a rescue (which is what we recommend) or off craigslist, a social networking site where a pig may be listed as needing a new home or even from a private person you may know.

What is the best fool-proof way to determine the age? Documented proof. Vet records, pictures with date stamps.

​We can generally look at a baby pig, or piglet, and be able to tell you that the piglet is very young. If you see a pig that is small, you are likely looking at a piglet. They are born with teeth, referred to as needle teeth, A pig that can fit in the sink is a very young baby, and the head is usually quite large in proportion to the rest of his body. These pigs are still growing, sometimes fairly rapidly, they're easy to please, love attention and there aren't any tusks evident. The hooves aren't usually worn down and the pads of the feet are soft. The fuzzy hair on a very young pig is evident as it looks like the fuzz on a peach. Younger pigs love to play and explore. This group of pigs will be the ones you see with the "zooomies" or little bursts of energy for a few seconds at a time zooming around the yard. The pigs in this group are the juveniles. Usually between newborn to 2 years old.

Obviously sexual maturity occurs at a very young age for both intact sexes, so if your pig is showing signs of desiring to mate, then your pig is likely older than 6 weeks of age. But once hormones start to surge, and intact (meaning not spayed or neutered) they pretty much act the same. Unruly and not desirable pets.

Younger boars grow armor, or tough, thick skin around their shoulders, to protect them in fights. Older neutered males will also get heavier, thicker skin, but not like intact males. Pigs who spend a lot of time outdoors will also have a thicker skin due to the exposure to the sun. The thicker the skin doesn't necessarily dictate an age group, but moreso a lifestyle. The overall skin condition can be an indicator of age. Older pigs tend to get that saggy, wrinkly, tough dry skin while the younger groups of pigs are still growing and although they may have dry or flaky skin, usually the skin is taunt and not loose as it can be in the older groups of pigs.

Fully adult males, roughly age 2 for boars and 5 or 6 for neutered males, may (but may not) grow very long nose hairs. Some also have extremely long mohawks, which is the long heavy bristles along the back of the neck and shoulders, and very long tufts on the end of the tail. Some will attempt to determine the age by the tail tassel alone, but this is not an accurate way to establish an estimated age. Some pigs have longer hair than others resulting in a longer tassel on the tail at a much earlier age. However, if a pig has a longer tail tassel combined with longer tusks and worn hooves with documented proof of a neuter? You can probably estimate that this pig is either in the young adult or mature adult group. somewhere between 3-12 years old.

Hoof length and overall condition can point to an estimated age. The longer and more worn the hoof and pad are can indicate a pig is of an older age group, but not specifically a 3 year old pig. More like between 2-4 or 7-8 year old group for example. Again, each pig will grow at a different rate, so this isn't the only factor to determine an estimated age.

The general disposition of a pig can tell us a lot about the age. An active pig is usually younger while an older pig tends to nap more. A younger pig will challenge you more and want to play whereas an older more mature pig would rather lay around. An older pig doesn't eat with the same gusto that a younger pig would (unless there are extreme circumstances like a neglected/starved pig who would eat anything as quickly as he could). A older pigs tends to trust more easily than a younger pig. An example would be an older pig who isn't familiar with you tipping for a belly rub while the less trusting younger pig backs away from new people. The lesser activity levels aren't gender specific, both males and females tend to calm as they grow older. The exception to this is the intact boar, they tend to be active even in their mature adult stages.

The eyes of a pig can sometimes help with age distinction. Pigs do not get crows feet or anything, but cataracts can point towards traits we would find in older pigs that are rarely present in younger pigs.

The tusk teeth can sometimes give a clue to the age of a female pot-bellied pig. Their tusks are not as thick or large as male tusks and grow at a slow, steady pace until the tusk root closes at maturity which is usually around 5 years of age. But male pig tusks aren't as helpful in determining age. Intact males, or boars, will have tusks protruding from the lips at age 6 months. Neutered males also have tusks, they just grow much more slowly, beginning to protrude past the lip at around 2 or 3 years of age. If there has been a tusk trim, this theory is of no use with the exception of the number of teeth. Pigs have 3 sets of teeth as mentioned earlier and based on the formula below (although pigs teeth may erupt in a different order outside of the parameters) it is a good guide to determine the approximate age in a younger pig. The general wear of the teeth can also be helpful, pigs grind their teeth, so sometimes in older pigs, their teeth aren't as long as others, some have super sharp tusks from grinding, some have broken or decayed teeth indicating lack of dental care or possibly, older age. There are even different enzymes pigs excrete that can be a good indicator of an estimated age, but this would require extensive testing of salvia and gastric contents.

Photo property of Colorado State University.
The UK did a research trial on comparison of ages in feral pigs that can be found by reading the following file.  ​ 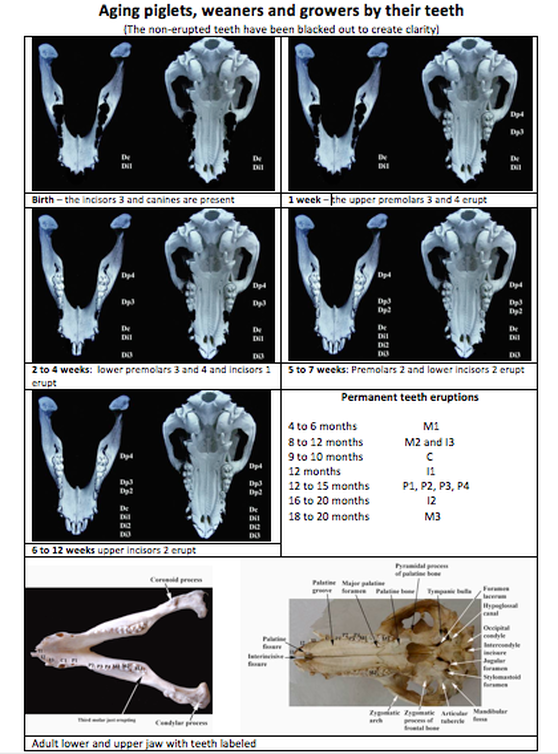 Photo credit and information provided by Dr. John Carr
So all in all, there really is no way to truly determine a pigs age with any degree of certainty. There are ways to estimate based on appearance, but that can be misleading at times. Overall body shape and condition in addition to the number and type of teeth, activity level, hoof condition and length combined with energy levels and skin elasticity/condition can point to a particular group, but not a particular age. A rough estimate can be given, but not an exact age, likely not even a year, but a group can usually be determined to help you decide the best handle your pigs needs. Although this information isn't conclusive, that is kind of the point. If someone says that pigs is 2 years old, ask them how they came to that conclusion. Compare the response with the information here and see if you agree. Pigs of any age can make great pets with the proper care and training and pigs who have suffered extreme circumstances like morbid obesity or malnutrition will be much more difficult to estimate because of how the extreme condition's change the outside and inside characteristics of their bodies. Use this info as a general guide, but your vet is the best one to advise you about the age after a thorough exam.

The main problems are when people pass pigs off older than they actually are. This can be dangerous for a number of reasons, but the most common is an underaged pig being sold by a dishonest breeder. Unfortunately, many of these pigs sold to unsuspecting and uneducated pig parents result in the death of a piglet. If the piglet survives and circumstances don't allow for the family to keep the pig, the cycle continues when the family finds another home for said pig and passes on the inaccurate age information they were given. Same can be said for "micro or teacup" pigs. Although not accurate terms, nor a breed, once someone thinks they have a micro pig, this is the adjective they mention when referring to their pig because they don't know any better. Be kind with your words and attempts to educate. Once you upset someone because you are being harsh, that person doesn't want to hear anything you have to say. Instead, they usually leave the forum in which they could've been educated.
If you are tricked into believing a pig is much older than it actually is, you can click here to learn how to care for an underage pig. **This is NOT an ideal situation** But, we understand it does happen so dedicated a section of the website to helping those who have been affected by the deceit of others.
Next Page