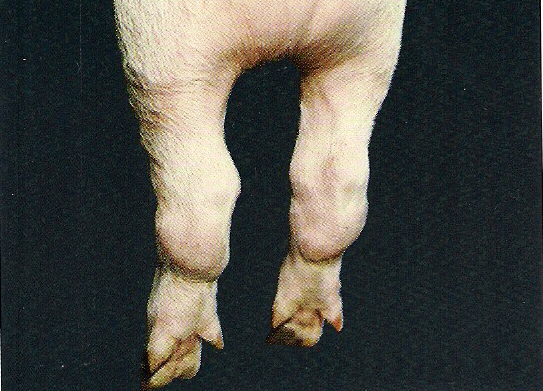 The tiny organism Mycoplasma hyosynoviae, which is ubiquitous, causes this and most, if not all herds are infected with it. It is a respiratory spread disease the organism being found in the upper respiratory tract nose and tonsils. It may be present in some herds and cause no clinical signs and yet in others cause severe disease. Infection with or without disease takes place in the young growing pig from approximately 8 to 30 weeks of age and particularly so in the gilt when first introduced onto a farm, or in the early stages of pregnancy. It is very uncommon in older sows because they develop a strong immunity resulting from repeated exposure to the organism. They pass this immunity to their offspring in the colostrum. This maternally derived immunity gradually disappears over a period of weeks. Infection then takes place as these pigs become exposed to older ones. Mycoplasma hyosynoviae infects joints and tendon sheaths rather than the respiratory system. Although the Mycoplasma hyosynoviae organism lives in the respiratory tract of the pig and is spread via inhalation, it damages the joints, usually the stifle. Pigs show shifting lameness, which progresses to a stiff gait, then to pig-sitting and finally to recumbency. The pigs generally do not run a fever, and they often don’t lose weight until they can no longer get to the feeder comfortably. Initially, the stifle joint does not appear swollen, as it is covered by heavy muscle.

Often, at this point, owners call the veterinarian when the stifle joint is already very swollen and the joint is filled with pus. Treatment is usually not successful, and the origin of the problem is more difficult to determine by postmortem exam. If a postmortem is done earlier in the disease process, the joint fluid may be blood-tinged and the synovial membrane (lining of the joint) reddened and thick, but the surface of the joint cartilage appears normal. This is important because the condition is often confused with OCD (osteochondrosis dessicans), in which the cartilage is abnormal.

Clinical signs
Disease in the gilt is usually sudden in onset, the first signs being reluctance to rise at feeding time. There is a considerable amount of pain and the affected pig will only stand for short periods of time. The temperature may be normal or slightly elevated. It is more common in the heavy ham straight legged animal and purchased gilts which have been reared in isolated grow out units often become diseased four to six weeks after arrival.

Diagnosis
This is based on clinical signs and the response to either lincomycin or tiamulin therapy. Joint fluid can be aspirated and examined for antibodies and isolation of the organism.
Serology is not much help because sub-clinical infection is common and so healthy animals often have antibody titers. Rising titers in blood samples taken two weeks apart together with typical symptoms strongly suggest disease.
In problem herds, post-mortem examination may be necessary to reach a definitive diagnosis.

Management control and prevention
Mycoplasma hyosynoviae can be a recurring problem in breeding gilts particularly during the first 6 to 10 weeks after introduction to the farm. Consider the following:
Prevention tips
Many have tried feed medication to prevent the disease with limited success. The no-brainer recommendations are:
Source: ​http://www.thepigsite.com/mycoplasma-arthritis
http://nationalhogfarmer.com/mycoplasma-hyosynoviae-infection-lameness
http://www.pigprogress.net/Mycoplasmal-arthritis
http://www.ncbi.nlm.nih.gov/pubmed
Next Page