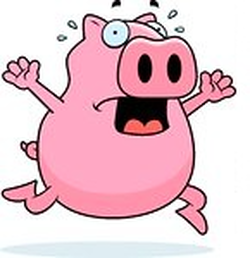 Porcine Stress Syndrome (PSS)
Porcine stress syndrome, sometimes called malignant hyperthermia or transport myopathy, is a complex, genetically transmitted myopathy usually triggered by stress or excitement. Typically this is a condition found in farm hogs.  Basically, this is a weak cardiovascular system that causes the pig to overheat and collapse when under intense stress, or shortly afterwards. Similar deaths have been reported in mini-pigs, usually after the intense stress has passed. It also can be triggered by several anesthetics, including halothane, and by depolarizing muscle relaxants. Signs that appear can include tremors of the tail, back or leg muscles, muscle rigidity, inability to walk, respiratory distress, hyperthermia, blotchy dermal hyperemia, acute right heart failure, and death. Savaging of neonatal piglets by PSS-positive dams has been reported. PSS is associated with an increase in muscling and leanness, so it is more common in the show pig arena.

The basic abnormality is an inherited defect in the mechanism for uptake, storage and release of calcium in muscle fibers. Efforts to eliminate PSS through genetic selection have led to success in identification and elimination of a stress gene in many genetic lines but this trait is also linked to heavily muscled phenotype. A polymerase chain reaction test is widely available and used to identify hetero- and homozygous carriers of the halothane gene; both types of carrier animals should not be breed.

Sources:
​Diseases of Swine, 10th edition- Wiley-Blackwell
http://vetmed.iastate.edu/vdpam
What does this mean in layman's terms? Stress can KILL pigs. We do not know which pigs carry this gene. But we do know the disease is genetic. I am quite certain most of you have seen some of the events that take place whereas people "wrestle" with pigs....not only is this barbaric and cruel, and not only do pigs get broken limbs and other major injuries, but some pigs can and have passed away due to the necessary stress. Typically this is seen in the larger farm pigs, but since pigs have been so crossbred and inbred, this genetic defect can absolutely be present in the mini pig population too.

When you see that a pig is stressed out, possibly has fluid dripping from the nose, is huddled and scared: back off. Let the pig settle down and consider a different approach. This fluid dripping from the nose can be one indicator that a pig is starting to overheat. The lighter pigmented pigs can literally turn red or bright pink as well. Please do not scare this pig to death, literally. Pigs are prey animals, so they do not enjoy being chased around. You CAN play with a pig and run back and forth with a pig in a playful manner, but greasing a pig or putting a pig in a mud pit and chasing a pig is NOT playing to that pig, it is mean and ANYONE who loves pigs like we do can see these pigs FORCED to participate in these kind of events is NOT having fun.

This disorder should'nt be confused with dippity pig syndrome which is also an illness pigs suffer from when under stress. Dippity is a short lived, temporary and non-life threatening condition. You can learn more about that by clicking here.
Next Page