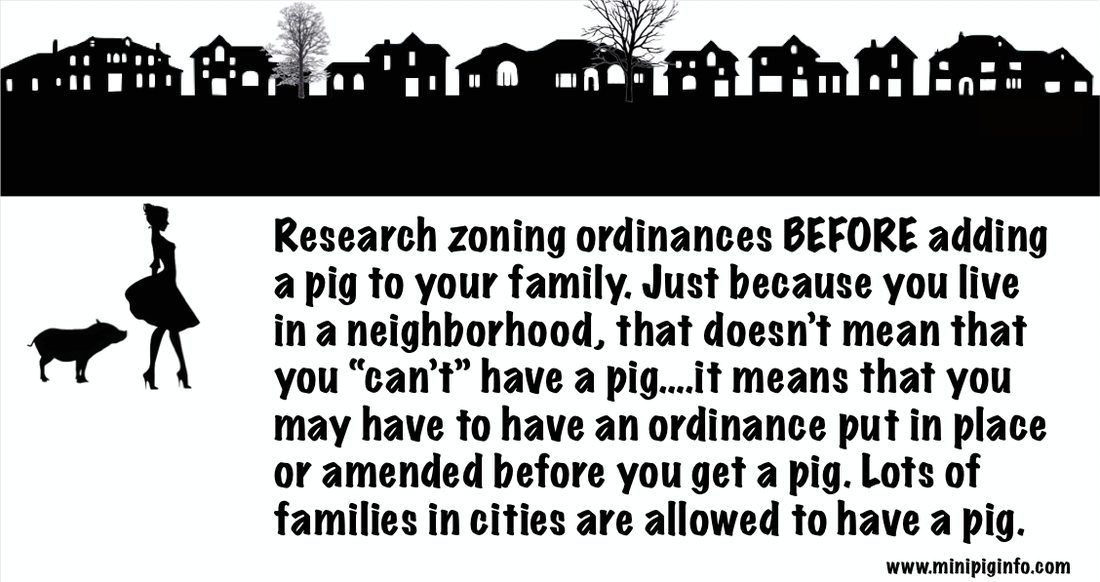 There have been so many who have had to fight to keep their pigs....Now there are experts that have dealt with zoning in various areas of the county...Ross Mill Farms has a packet of information along with an attorney who will consult with families regarding their zoning issues. PPN has no fees for using the zoning packet.  Also, a big bonus is that Phil will consult with families on how to win their case... NO fee.  Phil can be reached at philm@orgfood.com or by phone at Ross Mill Farm 215 322-1539.

So, before you have to sell your home or rehome your pet pig, there are some things you can do to ensure you’re even allowed to have a pet pig within your city/county limits and if you are, if there are any rules that apply. One website that stands out is http://www.bornfreeusa.org. This site has a running list of "exotic" rules for various cities and counties within the US and what is and isn’t allowed according to their ordinances. BUT...this is ultimately YOUR responsibility to find out and research yourself to ensure accuracy. This is one of many steps you can take to make sure you are safe from having animal control show up at your house and try to take your pig.

Go to your city's website and check the zoning ordinance. First, check to see if potbelly pigs are considered livestock or swine, then put those terms in the search bar and read. If you don’t understand what you’re reading, call and ask what it’s meant to imply. If your city/county doesn’t have a website or you can’t find this information, call the zoning commission and ask. Be sure to write down names/titles and extensions of those you talk to. Then you need to go to the zoning office and get a copy of the ordinance to have for your records. ALWAYS GET SOMETHING IN WRITING! Don’t assume because Shelly, the zoning office receptionist, said she didn’t see a problem, that it is ok. Shelly doesn’t have the authority to make that decision. Next, go to the zoning commissions office, every city/county should have one and ask to see the actual ordinance (if one exists) and get a copy. Then, call or visit animal control, these will likely be the people who enforce it anyways, so you need to know who they are and who is in charge. In reality, I want every single person at animal control to know me and my pig, God forbid she was to get out, they would know exactly where to return her to, or at least know who to call to pick her up from pig jail. They are the ones who will come to your home to remove your animal or request that the pig be removed from the city/county limits if he/she is not allowed. Hiding a pig really doesn’t work, I’ve seen people try and succeed for some time, but usually, someone at sometime, finds out and you still have to find another home either for your entire family or your pig. It's heartbreak either way, for you and especially for your pig. It’s not fair to you or your city, but mainly, it’s not fair to your pig who ultimately has to pay the price and be removed from his/her family and grieve...we’ve all heard the stories of the pigs who aren't thriving and depressed. The worst thing in the world is seeing a pig cry.

Here is an example of one city's potbellied pig specific ordinance.
http://www.cityofripon.org/RMC/Title-06/6-18_potbellied-pigs.pdf

Some have fought the city and won, others weren’t so lucky....but know that you can also try and apply for a special permit...you would need to visit general district court in your area and ask the clerk of court what you need to do because I am sure the process is different for every area.

In my city, we fought and won. Each resident in my city in Virginia is allowed to have one potbellied pig. This pig has to be an indoor pig, but can have outdoor accommodations. There are many stipulations that go along with the amended ordinance.... To find your cities zoning restrictions, you can go to your city's website. I searched for the term potbelly pig on the city website under city codes and three ordinances populated. This is concrete proof I am allowed, I didn’t need to call animal control because I can read my city ordinance and see what the stipulations are and what’s not allowed. I am one of the few lucky people who have an ordinance that specifically labels potbelly pigs as a pet rather than livestock. Some cities allow livestock within city limits, but they have to be kept at least 500 feet away from neighboring yards, or they may have weight limits or other special things that they wanted to be included in their ordinance. Some have conflicting ordinances, the city says ok, but the county does not, or the homeowners association (often referred to as HOA) doesn’t want a pig in their neighborhood. And what they say CAN and WILL impact what you’re able to do. HOA are powerful because you sign a contract with them agreeing to their terms and they can enforce them.

This is the 20/20 news story about several people who are fighting to keep their pigs at home. Tucker won (yay) but on temporary conditions and will be revisited in a year from the ruling. Save Sooie was saved and then overturned and now in process AGAIN....support those who are fighting to keep their pigs, we see so many dumped every single day and it’s great that there are those who fight to keep their pets. http://abcnews.go.com/2020/video/families-fight-pet-pigs-neighbors-complaints-midlothian-virginia-27975928

If you don’t know what your city has in place and you already have a pig in your home, we advise you to check and see what rules are already in place (if any) and be prepared in case someone decides that they want to cause you trouble. It's always better to be safe than sorry. And to be honest, I have stickers on my doors alerting people that I have a pig (really in case of a fire, for the firemen of course), she is part of our family and if no one knows we have her, no one would know to try and save her. Pigs don't always make the best house guests. If you rent your home, and thats not really advisable, once it's determined that your landlord approves of you having a pig on the property, you need to get that in writing should it become a legal issue later down the road. If you plan to continue renting, just be aware that a landlord doesn't have to allow pets and you may have a difficult time finding another rental property that will allow you to have a pig. Owning a home can present challenges as well, especially those neighborhoods with a homeowners association. So do your homework, whatever decisions are made, be sure to get names, addresses, phone numbers and titles of those who are giving you the answers. Do NOT take someone's word for it, always have something in writing for your own protection.

It’s in your best interest to check with everyone you can before you decide to bring a pig into your life, it’s extremely hard to live without one once you do.

There are many many families who do check only to find out later their pig isn't allowed. Make sure you have something in writing or an ordinance that will support your argument. One of the latest cases where this happened is in the following link.
http://www.12news.com/story/news/local/valley/2015/08/12/chandler-pig-service-animal-pet
​
Another pig family fighting the city to allow their pig to stay
http://www.wlwt.com/news/falmouth-police-pet-potbellied-pig-has-to-go

This is a friend of mine who had to move to another city in order to keep her pig. (Saved Sooie on Facebook)
http://www.arktimes.com/sooie-the-pig-finds-a-home-in-north-little-rock

​There are plenty of success stories when people have been able to have outdated oridnances amended to allow pigs to reside within city limits. Often times, ordinances were put into place before the first potbellied pigs were ever brought to the US. Click here to download our packet of information regarding how to start the process of legalizing your pig in your particular county/city. It will take some leg work, but has been done over and over again in many counties and cities across the USA.

Can I register my pig as an emotional support animal or "service" pet to get around the laws?

NO!!!!
1st, There are very specific rights for ESA (Emotional support animals) and one of them does NOT include city/county zoning.
2nd, EVERY single registration is fake. ALL of them. You do NOT register your pig to be an ESA. Not only is this a waste of money, but for people who know the laws, you are making it more difficult for them when they're not able to flash a registration card because they do not pay the money to have their pig illegally registered. There is NO registration. Period.
3rd, the city zoning ordinance isn't effected when you have an ESA. This does NOT give you the power to house a pig when they're prohibited. If you want to do something, get on the city council agenda and ask for an amendment or an ordinance to allow pigs within city limits, but do NOT pay money for a fake registration in order to skirt around the law. Pigs can NOT be service animals. Click here to read more about the differences between emotional support animals, therapy pets and service pets.
Next Page