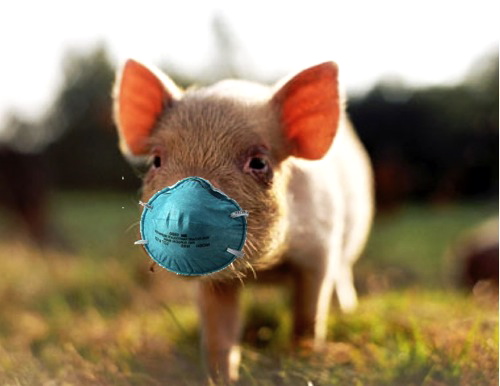 People have always said pigs do better in pairs and I agree with that theory. There are times when someone isn't initially able to get 2 pigs at once, so they decide later on to add another pig to the family. We encourage that, but we also encourage you to practice basic safety when adding another pig. Treat EVERY pig as if they have a contagious disease because until they're cleared by a veterinarian. They actually could and allowing your pig to make contact with a pig who may have a contagious disease obviously puts your pig at an unnecessary risk of contracting that disease.

The number 1 goal of any pig household/producer/farm is eradication, although that is rarely achieved in the larger venues. In 1-2 pig households? That shouldn't be a significant problem, but depending on where you acquire your pig can be. There are breeders, there are pig brokers, there are pig flippers and there are regular, everyday homes with pigs in addition to the pig rescues/sanctuaries. Each one of these will do things differently. Some proactively treat for parasites, some have never been treated, some are tested and treated as needed, for example.

An understanding of why disease occurs and how ir can be controlled requires some knowledge of contributions made by the environment in which the host and pathogen reside. This is a relatively complex interaction between the pathogen and host.

There are a few methods of transmission:
Separate any new pigs from the others until you know without a doubt, that the pig is free from disease. Doing this may very well save your other pig(s) lives. Biosecurity plans at their most rudimentary level to manage the risk of introducing new pathogens to farms, livestock communities or industries and/or countries and to minimize the transmission of endemic diseases between farms between those levels. These goals are accomplished through segregation of uninfected from infected animals (or form the actual pathogen itself) thorough cleaning of the premises in which these pigs live as well as facilities they've lived in and appropriately manage the disinfection of the same. We are obligated as pig parents to develop a more holistic approach to biosecurity that appreciates the agriculture contribution to zoonotic disease transmission and our broader impact on the environment and biodiversity.

Biosecurity is fundamentally about managing two sources of special cause variation on farms/communites, pathogens and people. Biosecurity should be used as a discipline and reviews of updated literature should be done often to be sure there are no additional methods that can be implemented where you are to further protect your pig from transmitting a potential agent that could've been avoided. Biosecurity risk management has been suggested as a term for use in identifying infectious hazards to pigs, assess the risks presented by each hazard, then develop plans for managing each of the hazards.

Basic principles that should be followed:
Sources: Diseases of Swine, 10th edition Wiley-Blackwell
Another great tool that can be used is from the USDA website about biosecurity. A checklist to help you determine actions that you should take to reduce the risk of spreading disease for any pig with outdoor access. See the PDF file below that can be downloaded as well as a link to this page on their website.
https://www.aphis.usda.gov/publications/animal_health/biosecurity-for-pigs-outdoor-access-checklist.pdf