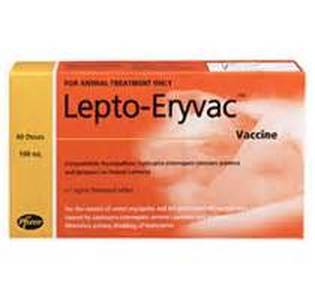 Leptospirosis is a bacterial infection that colonises the kidneys and genital tract of the host.
The disease can be spread to humans and other animals when leptospires are shed in the urine and from the reproductive tract into the surrounding environment. So, when dealing with this illness, special precautions need to take place to prevent infection from spreading from human to pig or vice-versa. This disease is spread through the urine of infected animals which gets into the soil and possibly water. It can survive in there for weeks or months. Pigs obviously come in contact with it by rooting around in infected soil or walking thorough contaminated water. People can also contract leptospirosis. The easiest way to reduce the possibility of your pig contracting this disease is to vaccinate against it. Leptospirosis infection is carried in urine. After being treated, recovered animals are a source of infection. Under ideal conditions, leptospires survive in water and damp soil. There they remain a persistent threat to a wide range of animals, including swine and man. Incidental hosts can be infected or merely act as passive transport hosts that carry leptospires to other premises. Carnivorous forms of wildlife may visit swine-raising facilities, feed on dead piglets and later visit other premises. They may be underestimated as transmitters of Leptospira.

L. tarassovi and L.pomona are usually the most common types found in pigs.
Clinical signs of leptospirosis in pigs can include abortion, weak or stillborn piglets, which can all affect the productivity and profitability of the herd. The main concern for big pig production type farms is the effect it has on breeding. It is a serious reproductive disease

Symptoms in humans range from profound fatigue and headaches to muscular aches and vomiting. Usually, infected people return to work within 3 to 4 weeks, however continuing relapses can occur. The disease is a significant occupational health and safety issue for pigs, producers and the most important method of prevention is vaccination of the herd.

Leptospirosis is a contagious disease of swine and many other animals (including humans) and is caused by infection with any one of a large group of Leptospira spp. serovars. Although the generalities of leptospirosis in swine are presented here, details of infection with different serovars may vary. Swine are susceptible to many different servers. Leptospirosis occurs in swine in all parts of the world where conditions are favorable for the survival of leptospires. The occurrence of any one serovar of Leptospira in an area depends on the presence of maintenance hosts in which the infection persists or the presence of incidental hosts. In both instances, leptospires can be effectively disseminated to swine. The disease occurs more frequently where the hosts are numerous or concentrated.

Contributing Factors
Zoonotic Risk
Leptospire bacteria, including Pomona and Canicola, are zoonotic (i.e. can cause disease in humans). Pomona causes ‘flu-like illness in humans similar to that caused by L. Hardjo, which is present in GB cattle. The advice is similar to that for any of the zoonotic agents present on pig farms. As a routine, people working with pigs should wear outer clothing and boots dedicated to the pig unit and practise good personal hygiene.

Gloves should be used to handle afterbirths, aborted and stillborn piglets, and when assisting at farrowings; they are also recommended for artificial inseminations and assisted matings. The main concerns relevant to leptospires relate to contamination of people’s mouths, noses, eyes or open wounds by pig urine, afterbirth, and aborted and stillborn piglets. Effective rodent control is important as urine from infected rodents also represents a transmission risk to humans.

Clinical signs
The acute phase of leptospirosis largely coincides with an initial stage of leptospiremia as well as virulence of the particular serovar involved. Signs often go unnoticed in mature, nonpregnant swine or in growing pigs. A careful observer might notice mild fever and inappetence for a few days. In very young piglets, however, there may be fever, anorexia, hemolytic anemia, hemoglobinuria, icterus, convulsions in occasional pigs and a failure to grow and gain weight. Infected pigs are seldom visibly ill, and the only noticeable signs may be loss of appetite, listlessness and a mild scour lasting a couple of days. The significance of the disease, apart from the hazard to human health, is that infected pregnant sows abort or produce stillborn or weak pigs that often die soon after birth. Abortions generally occur in the last three weeks of pregnancy, but may be as early as day 16 of pregnancy in susceptible pigs that have received a massive dose of bacteria

Chronic infection in sows usually is apparent only as various forms of reproductive failure, including poor conception rates. Pregnant, infected animals often abort in late gestation. In many cases, fetuses are carried almost full term but may be mummified, dead, or weak at birth. Although many infected neonatal pigs die within a few days, some often survive. The dams usually recover promptly. They often conceive again and carry their litters to term.

Lesions
Lesions seldom have been described in sows since most infected adults recover. Grow/finish swine may have scattered foci of interstitial nephritis or generalized kidney scarring which may only be noticed at slaughter as “white-spotted kidneys.” Lesions in small piglets include patchy areas of hepatic necrosis, excessive fluid and fibrin in the peritoneal cavity and evidence of inflammation in multiple organs. Microscopically, there is a marked focal, disseminated, interstitial nephritis; tubules and glomeruli often have degeneration and inflammation. Occasionally, a nonsuppurative meningitis can be observed. Placental lesions seldom are marked or significant but may include edema and scattered hemorrhages.

Control
Control usually is attempted by prevention of exposure, immunization through vaccination, and/or the use of antibiotics. Prevention of exposure is difficult to achieve because so many species can act as carriers of leptospires. These include infected swine, rodents (especially mice and rats) and many kinds of wildlife. Once leptospires are introduced into a favorable wet environment, they often persist there as a source of infection. Nonetheless, leptospirosis can be effectively controlled (perhaps even eradicated) from swine populations raised under confinement conditions using a combination of medication, vaccination, vector control, and providing a treated or non-contaminated drinking water source. Immunization through use of bacterins, widely practiced in breeding herds, usually will reduce the prevalence of infection and abortions. The bacterin must be appropriate for the serovar of Leptospira causing the disease. Many bacterins are multivalent. The level of immunity obtained and its duration may not always be satisfactory. Also, bacterins usually will not eliminate infection in carriers. Antibiotics used judiciously may reduce the impact of leptospirosis. It is doubtful that all carriers can be eliminated by the use of permitted antibiotics. Research suggests that oxytetracycline, tylosin, and erythromycin are among the most effective agents.