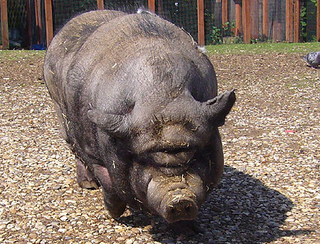 The pig pictured above appears to be favoring the right side and tilting the head slightly to the right. Your pig may have an obvious head tilt (that stays tilted) or your pig may have on and off symptoms depending on the cause.
I just wanted to address this as it seems to come up frequently. A head tilt can have several causes, some may require a trip to the vet, while others can be monitored or treated at home. Pigs typically tilt their head for a couple of reasons. The number one reason is either water or a foreign object being in the ear canal. Potbellied pig's have very sensitive ears and a small amount of water (like just a few drops) or mud in one ear could cause head tilt. Did your pig recently take a bath or get in their pool or mud hole? If there is a possibility of water getting in their ear (and that can be one drop from carrying their water bowl over their head to dipping their head in the water) then you may want to wait a day before calling your vet unless there is a fever present. ANY time there is a fever present, your vet should be called. Often times, within 24 hours, this resolves on its' own. Pigs have a very deep and narrow ear canal, and if water gets in the actual canal, it can take 24-48 hours to evaporate. You cannot reach the ear canal with a q-tip, and it isn't recommended that you use Q-tips on pigs. Normally, this is accompanied by a twitching or flicking of the ears and the ears also seem to be especially erect and the affected ear may droop and twitch. Sometimes there is a head shake while other times there isn't, but usually they do seem to be irritated when you touch the affected ear. This is from my personal experience with this. (Multiple times and multiple pigs)

There have been times where there has simply been some skin or a piece of hair that has irritated the canal enough to cause them to tilt their heads or a parasite, like a tick. Ticks like the soft areas and inside of the ear is soft enough for them to attach themselves. If ear mites are suspected, you can try the Ivermectin or ask your vet how they'd like you to treat. Remember, ear wax is the body's own defense system to try and keep unwanted objects, bugs, water, dirt and everything else from getting into the ear canal. So keep the cleaning at a minimal. Some ear wax needs to be there to protect the ears. There is a brownish color wax in the ears and this is normal and should be left in place so it can protect the ear canal as it was designed to do. A foul smelling ear is another sign of a possible infection and you'll need to call your vet to determine if he would like to see your pig. Typically, foul smelling in addition to a fever would point to a possible infection, maybe even a yeast infection in the ears (s).

Another potential cause is because there is an actual middle ear infection. This will need to be treated by your vet. If there is a fever and a head tilt, you likely have a sick pig. Do not put a Q-tip in your pigs ear, the anatomy will only allow you to get to what you can see anyways, and you can clean the ears using a baby wipe or towel of some sort. Some pigs love their ears to be cleaned, while others hate it and if you're using a Q-tip and your pig is NOT a fan, you run the risk of jamming that Q-tip where it shouldn't be and possibly causing damage to the ear canal or worse, the ear drum. Other reasons why pigs may have this head tilt are vestibular disease, and some parasites, and even some inherited diseases.  If your pig suffered from an inherited disease the problem would probably have appeared early on and if you cant attribute the cause to any of the reasons above, you will need to seek advice and possibly testing from your vet to determine the underlying cause.

Middle Ear Disease
This condition is characterized by the pig walking with a pronounced head tilt. The most common symptom is shaking of the head. Radiological examination reveals an abscess and occlusion of the middle ear on the side of the tilt. There is some evidence that M. hyorhinis may play a role in the pathogenesis. Culture at post-mortem tends to reveal a mixed bacterial population. The condition is more common in weaners who develop colds and sneezing 10-20 days post-weaning.

Treatment of individuals may be unrewarding. Injections of ampicillin have been effective.  Control is to avoid chilling and drafting pigs. However, the problem tends to be sporadic and the infectious cause isolated and treated in order to "cure" the underlying problem.