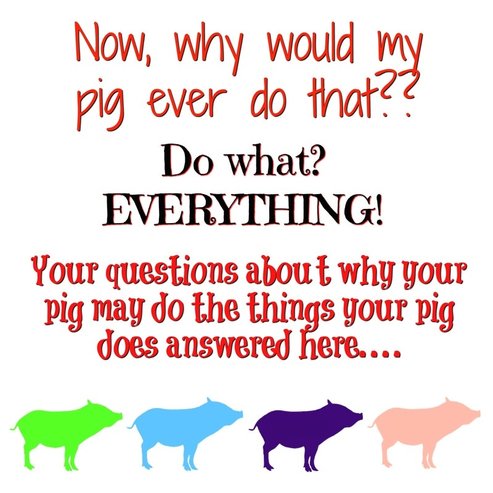 Does your pig display behaviors or do things that leave you scratching your head? Join the growing group of people who are asking why is my pig doing this or that. Some things we know are linked to other things, while some we are having to research to find out. Ultimately, as we learn more, and we are asked more questions, as we learn the answers, we will add them to this page.

Why does my pig drink urine?

A simple response could be because your pig doesn't have access to fresh water and urine is better than nothing. However, if your pig has fresh water available, there may be other issues causing your pig to seek out urine.

In March 2007, a 180 sow unit experienced abnormal behaviour of wall licking, urine drinking, belly-nosing, penis sucking and ear biting at the base of the ear in weaned pigs from seven to 10 weeks old and in finishing pigs. Feed intake, growth rate and feed conversion were affected. An investigation was carried out involving clinical examination, laboratory and nutritional investigations. A diagnosis of vice (abnormal behaviour) with a possible nutritional link due to low salt (NaCl) in the diet was made based on these investigations. A control programme consisting of re-formulation of the weaner and finisher diets for salt was implemented. This resulted in the correction of this abnormal behaviour in the weaners and finishers. No further cases of this abnormal behaviour have occurred since.

​So a mineral deficiency is one reason why this may be happening.

​If there is an intact pig versus an unaltered pig, this is another reason why a pig might drink urine of another pig. If your pig is drinking the urine of a different species of animal, such as a dog, there may be underlying reasons why this is occurring as well.

Why does my pig eat poop?

This is especially concerning if litter is involved. Pigs will eat the litter especially the litter that has a nice fragrance. So no clay clumping type litter and no cedar chips. The urine mixed with the cedar causes a gas to form which can cause serious respiratory problems. Also, pigs have been known to eat dog, cat and even their own poop. Although gross, poop eating is a natural (although disgusting) habit of most omnivores and carnivores. Vitamins, fats and other food stuffs are passed in the stool. In addition, beneficial bacterial cultures can be found in stool. So it's not really a huge concern, but NO kissing your pig until he gives up this habit. ​

Why does my pig root up my floor or root on me?

A pig has a natural instinct to root. If unaltered, this may be a sign of a pig who is seeking a mate. A pig that is taken from mama too soon may be satisfying the urge to nurse. A bored pig may root up flooring. Ensure your pig has time to be outside and be a pig! They NEED outdoor time. They need to dig and play and root. But rooting, though sometimes aggravating, is not necessarily a sign of an upset or angry pig. Often times it is quite the opposite. You can provide a rooting box with ball pit balls and sprinkle in the occasional cheerio for positive reinforcement.

Why does my pig grind its teeth?

Teeth grinding in potbellies can be extremely annoying, it can sound like crushed rocks being ground together. Teeth grinding is common and may not indicate pain, hunger or distress. Edible treats should not be used as rewards as the pig may become obsessive. In the wild, pigs grind their teeth to sharpen them with male pigs sharpening their tusks in this way. So in this sense, it’s perfectly natural for a pig to grind his teeth. In my experience, pigs grind their teeth for many reasons, some is habit, some is sharpening their tusks, other times its because there is an issue with the teeth or jaw causing discomfort. Always check your pigs teeth and gums for any sign of disease/abscess. Include this in your daily routine/health inspection and after doing it for a while, your pig won't be hesitant to allow you to check the teeth and gums. Do NOT do this for a pig thats unfamiliar with you. A scared pig can and will bite and based on the size of the tusks, this can lead to serious infections if the pig "tusks" you accidentally or on purpose. This can cause terrible localized or blood infections in people or animals that your pig "tusks" or bites. So keeping the tusks at a manageable length can prevent this kind of injury to yourself, other people or pets.

A domesticated pig will grind their teeth for a few reasons. If they are around 2 years of age, your pig could be teething and once that’s finished the grinding should stop or at the very least reduce. Your pig could also be distressed for some reason, so you might want to make sure that there hasn’t been any major changes in your piggie’s life or anything that might make your pig stressed for some reason. Remove the source of the stress and the grinding should cease. A third reason is that your pig could simply be happy and content! If this is the case, sadly there’s not much you can do to stop the grinding directly. There are situations where there may be a piece of food or dirt/foreign material that is causing discomfort and therefore the pig is grinding the teeth to try and dislodge the material. There have been times where there was an infection or abscess causing the pig to grind its teeth, so be sure to check the mouth and gums for abnormalities before writing it off to teething.

You can try to lessen the effect of the grinding by giving your pig a soft toy to chew – some of the dog chew toys can be quite good for this purpose. At least your pig doesn’t bark....it’s a much more annoying trait. Choose dog treats carefully as some have been known to create a choking hazard and shouldn't be given to a pig who simply swallows food without chewing. The body's enzymes used to breakdown food aren't effective on synthetic treats and sometimes they can get lodged in the throat or even swallowed and cause intentional blockages. Whimzees have been named the treat of choice for many pig parents for dental purposes. Greenies have been known to include an ingredient that may be harmful to pig, so stay away from that particular brand. (I do not have the information to support that, but it is better to be safe rather than sorry) But be sure your pig is a chewer, not a swallower. Pigs that tend to swallow and not chew their food don't necessarily benefit from the use of these treats as they're used to help reduce the amount of plaque buildup on the teeth. If your pig swallows this whole, it can get lodged on the throat or cause an obstruction. You will know your pig better than anyone else, so watch them eat one before providing them on a regular basis to be sure they're chewing before swallowing. Whimzee's have come the treat of choice for mini pigs.

Why does my pig charge at people and try to bite them?

There are multiple answers to this question, but first, you need to determine if there is a medical issue causing your pigs behavioral change. Sometimes there is, sometimes there's not. Is your pig spayed/neutered? Hormones drive a pigs behavior. Has someone mistreated your pig and your pig charges at one perosn or multiple people? The solution to fixing the problem lies in identifying the reason for the behaviors. This isnt always easy. Some pigs do not like specific colors and attempt to attack when you are wearing red, for example. Or a after you apply a particular scent like perfume or the smell of your shampoo. I do believe pigs have triggers which cause this type of response from them and you will need to determine that that is. How? Keep a journal of your pigs actions. Take alot of notes. Document what your pig eats, when your pig potties, who visits and when, what people are wearing, the time of day, etc. You will eventually come across the common factor and that is likely what is triggering the behavior. Click here to read more about agressive behavioral issues and pigs.

Why does my pig use his/her legs like a bull getting ready to charge...constantly?

This is called "nesting" and it is a normal behavior for pigs. Nesting is when a pig will "collect" things from around the house to take back to "their" space. We call this hoarder corner in my house and it is the first place my family and I go when we are missing something. I actually saw my pig doing this today and took a quick video to explain what I am taking about. If there had been a blanket or other object there as she was doing this, she would've taken it back several feet to her bed. (Which is what she was desiring to do) And FYI, I did put a blanket down later so she could get the satisification of moving something.

Why does my pig look like he/she is gagging?

Pigs like to taste EVERYTHING...and by everything, I mean everything including the air. Pigs have an enormous amount of taste buds and when they open their mouth and appear to be licking the air, they are simply tasting something. That doesn't mean it tastes good or bad, just sampling. They also tend to lick alot of surfaces, again, sampling anything they can. That is normal.
Next Page