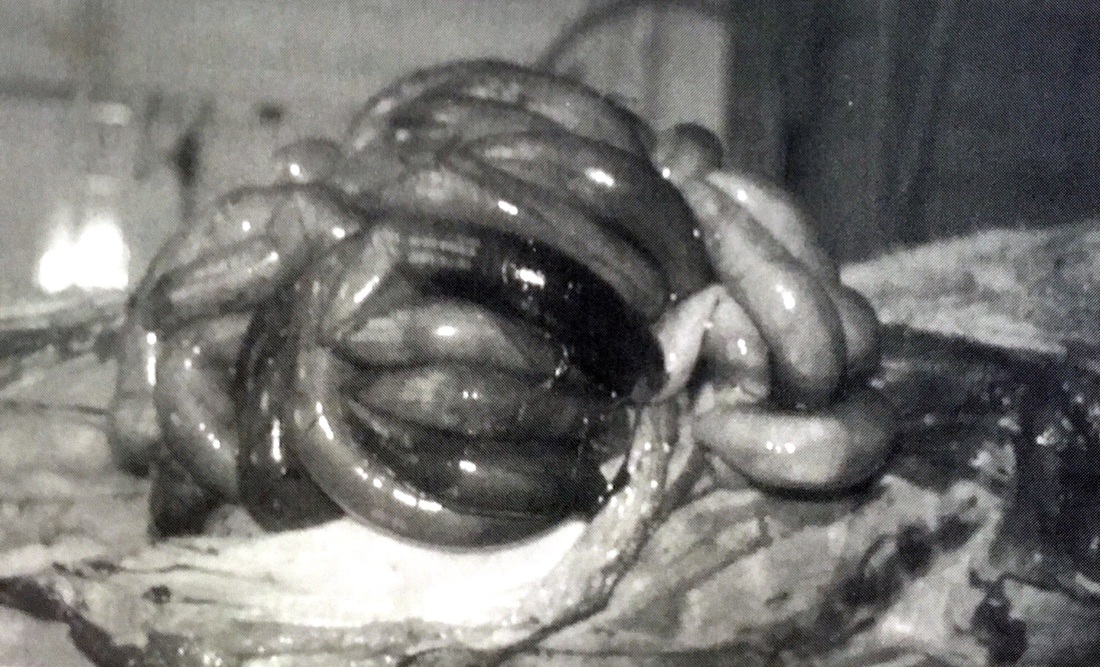 Pigs can get gas much like people do. Gastric overdistension can occur in adult pigs, especially sows, but the cause remains unknown. It is thought to be associated with excessive intake of finely grounded grain and water resulting in excessive fermentation and ultimately gaseous distention. Why is this a problem?

For one, a gassy belly can be extremely uncomfortable to a pig. Excessive pressure on the belly can affect breathing too since the gas causes the stomach to "swell", this puts pressure on their already small lungs causing a domino effect. The lungs can't fully expand leading to shortness of breath.

Secondly, this can also be confused with other conditions that may cause that bloated look. Parasites can look similar, malnutrition can appear the same way.

Gastric volvulus is thought to be due to rapid intake of large quantities of food and water followed by physical activity, more-so in a competitive group situation. Clockwise torsion is the most common, although torsion can occur in either direction. The spleen is often also involved and becomes extremely enlarged due to the blood engorgement. The stomach becomes massively distended with gas and fluid, and intense mucosal congestion develops. This condition is rapidly FATAL.

Gastric foreign bodies, such as stones, are frequently found in the stomachs of outdoor sows that are maintained in areas with small stones that can be swallowed like gravel areas. Stone chewing is a regular activity while swallowing them is thought to be accidental. Large quantities of stones have been recorded in some sows, limiting the capacity of feed intake resulting in loss of body condition.

Gastric venous infarction occurs in pigs, usually associated with bacteremia, such as salmonellosis, erysipelas, or Glässer's disease or with toxemia. The gastric mucosa in the fundic area (see picture below) becomes reddish black in color and caseous mucosal necrosis may be evident. Thrombosis of capillaries and venues in the mucosa and submucosa with fibrin plugging is the cause of the infarction. (Infarction is the obstruction of blood supply to a particular part of the body usually caused by a blood clot or thrombus, causing localized death to the region not being supplied by any oxygenated blood) Multifocal areas of gastric infarct have also been recorded in cases of porcine dermatitis and nephropathy syndrome (PDNS), due to fibrinoid vasculitis of capillaries. 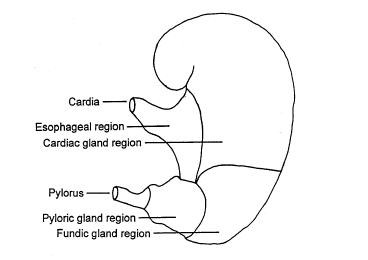 Photo credit: thepigsite.com
Edema of the stomach wall is a characteristic change in edema disease caused by specific strains go E. Coli. Edema affects the submucosa, particularly on the greater curvature of the stomach. Other conditions causing gastric edema include hypoproteinemia, arsenic toxicity and portal hypertension. In these conditions, edematous changes are less pronounced than those of true "edema disease".

Gastritis in pigs is most commonly associated with ulceration of the esophagus and the inflammatory sequence affecting the tissue in the cardiac zone of the stomach. Candidiasis of the pars esophagus may occur in association with pre ulcerative epithelial hyperplasia and parakeratosis. Gastritis could occur due to accidental intake of toxic compound, such as...arsenic, thallium, formalin, bronopol and phosphatic fertilizers-and also by the toxic principles in bitterweed (Hymenoxon odorata) or the blister beetle (epicanta sp.) In commercial farming, such conditions are rare and should be easy to exclude, but pet pigs may have access to some of these toxic items in a garage or backyard.

Diarrhea can be problematic for pigs as this is not "normal" bowel function. Diarrhea can occur for many different reasons, click here to read more about first aid for diarrhea and what may be causing it in pigs.

Myocotic gastritis is occasionally seen in piglets, but this is usually related to repeated use of antibiotics. Lesions present as multifocal yellowish plaques on the gastric mucosa, with intense congestion of the peripheral gastric mucosa. Fungal agents colonize the mucosa and invade tissue and capillaries resulting in thrombosis formation. (blood clot)

Parasitic gastritis is more rare, but can be problematic if a pig isn't on routine parasite control medications. Affected pigs show poor body condition due to chronic gastritis. Of the known parasites that cause gastritis, hyostrongylus rubidus (red stomach worm) is of the most important because it is associated with poor growth rates in young pigs and loss of body condition in adult pigs. Other parasites that can cause gastritis in heavy infections include ascarops sp. (larval nematodes) and physocephalus sp. (Spirurida). These parasites are common in many parts of the world, in feral pigs and those kept under extensive conditions to graze and foraging conditions. The parasite gnathostoma sp. occurs in Asia. It invades the mucosa and underggoes development within inflammatory cysts in the submucosa. In heavy infestations, this parasite can cause thickening of the stomach wall.
Intestinal Displacements

​Rectal prolapse is a relatively common and an important condition affecting growing pigs as well as adult pigs.The rectum is held in place by a complex matrix of fascia, collage fibers, muscles and ligaments and a rectal prolapse will occur is the support mechanism is either overcome by pressure (obstruction) or weakened by some other reason (chronic constipation). Pressure on the support mechanism may be brought on by straining )proctitis, urethritis, constipation, coughing and/or farrowing) or by physical pressure (excessive slope on the floor or increase in abdominal pressure for whatever reason). A research group was able to produce rectal prolapse in 10 pigs by filling the abdomen with water at pressures of 222-343mmHg. Pigs of all ages can be affected by rectal prolapse, outbreaks do occur and can be prolonged.

Rectal prolapse is sometimes associated with enterocolitis caused by viral, bacterial, parasitic or mycotic infection. In cases where the inflammation is severe and irritation of the rectum occurs, tenuous results and rectal prolapse may be a sequel. In older pigs, urethritis and vaginitis from any cause may lead to straining, which may, in turn, lead to prolapse of the rectum or vagina or both.

Sudden changes in the diet (from meal to whey, for example) may lead to occasional cases of rectal prolapse. Constipation caused by chronic water shortage or low fiber diet may result in straining and subsequent prolapse. Other nutrition related associations that have been reported to veterinarians include high lysine levels and lupin bean meal toxicosis.

Injury by another pig can also result in a prolapse, in addition, gradual weakening of the pelvis diaphragm may arise as sows get older or during pregnancy as the abdominal contents are at its heaviest. Rupture of one or more of the supporting structures may also then occur with prolapse of the retum or vagina or both.

There was another study done noting that rectal prolapses occurred when pigs are transported at high stocking density.

It is generally agreed that rectal prolapse occurs more frequently in the winter months and researchers have come up with evidence to support that claim. It has been suggested that the cold weather causes pigs to pile, thus increasing the likelihood of prolapses, but there is no data to support that theory. My theory is that pigs lay around in the warmer areas, such as sun bathing or in their enclosures and do not get out and exercise causing chronic constipation resulting in prolapse.

One researcher noted that low birth weight (less than 1000 Grams at birth) were more likely to suffer from rectal prolapse later in life. it has been said that the lower birth weight have fewer muscle fibers and an inherently weaker rectal support mechanism, which may fail when a period of rapid growth occurs.

Some prolapses resolve spontaneously, but more commonly, the tissue becomes traumatized or removed by other pigs followed by scar formation as a part of the healing process. This can result in rectal stricture. In a study of 25 pigs with rectal prolapses that were allowed to heal naturally without treatment, there were 3 that developed complete rectal stricture and passed away. The remainder of the pigs grew normally and because this study was done with farm pigs, the bodies were examined at slaughter and every single case had some evidence of rectal stricture at that time.
Intestinal Obstruction, Impaction, and Hernia

Intestinal impaction and obstructions can occur in a variety of situations, for example, deaths have occurred when piglets are maintained on wood shavings or other fibrous materials such as peat due to impaction of the ileum or colon with these materials. On occasion, heavy infestations of ascaris suum have been found to be the case of small intentional impaction in piglets, Herniation of the intestine is most commonly associated with patent umbilicus. This occurs when weakened supporting muscles around the navel or umbilical stump impede the umbilical closure. Genetic and environmental factors can contribute to this. Suggested environmental factors include excessive stretching of the umbilical cord during farrowing, placing naval clips too close to the skin, and neonatal bacterial infections of the umbilicus. Close inspection often reveals evidence of chronic bacterial infections. The larger lesions are often traumatized with increased risk of intestinal strangulation within the hernia unless the defect s corrected surgically.

Torsion of the long axis of the mesentery is a common condition in pigs and leads to rapid death. The torsion may involve the small intestine or both the small and large intestines. Rotation is usually counterclockwise when viewed from the ventralcaudal aspect. Torsion is associated with pigs making sudden unpredictable movements, such as sudden deceleration with abrupt changes in direction, particularly when the gut is filled-for example, after a feeding or drinking of large volumes of water or when the intestines are filled with gas due to the pig being on a highly fermentable rational Once the torsion occurs pigs rapidly develop distension of the abdomen. The intestines loops, apart from the first portion of the duodenum, becoming very turgid and reddish black in color. The lumen is distended with gas and contains dark red, watery fluid. The mesenteric vasculature is extremely engorged due to the obstruction to the venous return.

In pigs with intestinal hemorrhagic syndrome (also called hemorrhagic bowel syndrome, porcine intestinal distention syndrome or bloody gut) the intestines have a similar appearance to cases of intestinal torsion, but no obvious displacement of the intestines or mesenteric torsion can be identified at necropsy. Typically this occurs under similar circumstances to the cases of torsion, where pigs are fed a highly fermentable ration, particularly fed in liquid form. Feeding fresh whey ad libitum (as much as desired) has been associated with significant problems of the intestinal torsion and has been given the name whey bloat. Researchers artificially induced pressures that reached the same levels of pigs with "whey bloat" and found that it does, indeed, cause the occlusion of the mesenteric veins and obstruction to venous return with fatal consequences.

Preventing whey bloat can be achieved by allowing the whey to ferment before feeding, limiting intake to no more than 20% of the ration and feeding it as a part of complete nutrition to avoid preferential ingestion of excessive quantities. In instances where no whey is associated with the problem, efforts should be made to reduce the rapid fermentable properties of the diet.

Many diseases and illnesses can affect the gastrointestinal system in pigs. (See chart below) 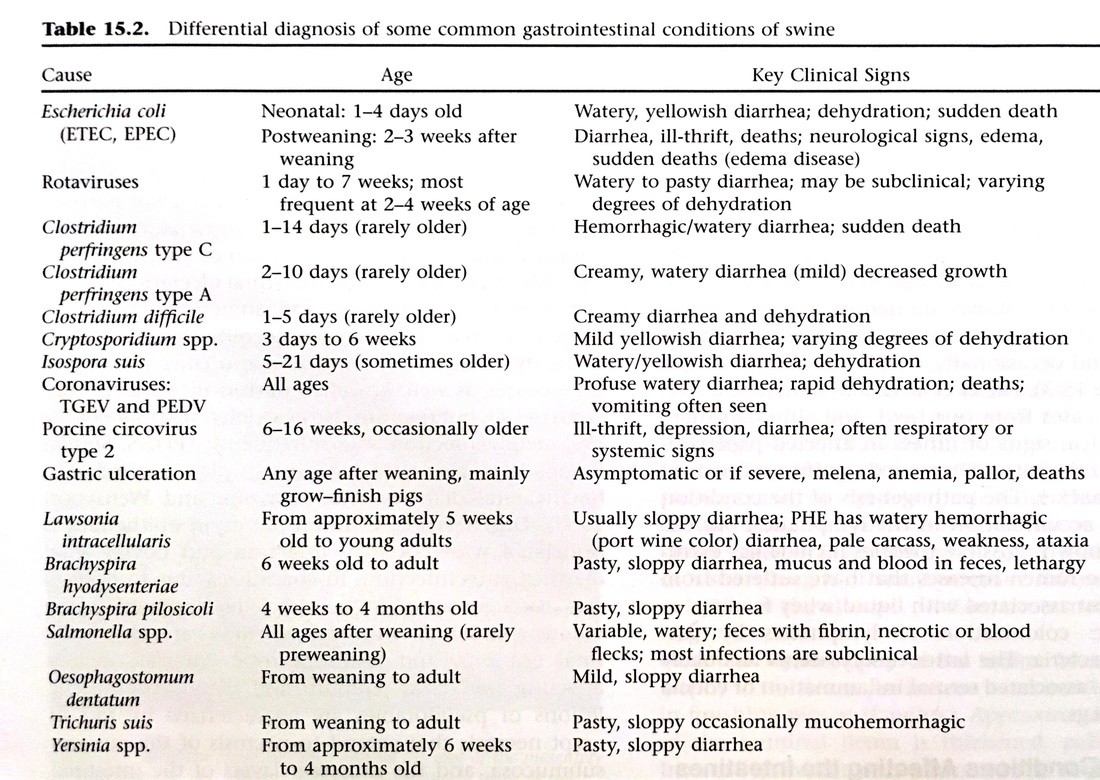