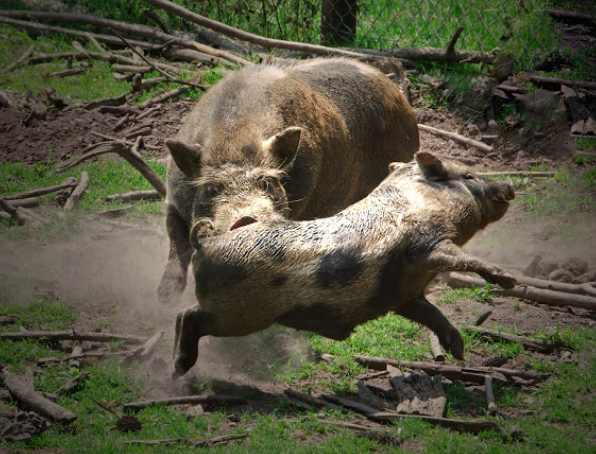 Pigs do better in pairs. That is just a fact. So, you decided to add another to your family? Believe it or not, this is usually a good thing. Dogs have other barking dogs they can "talk" to, cats could careless what anyone, much less another cat, has to say, pigs do not typically have another pig in the neighborhood they can chat with. Getting them a friend is a great way to 1. Keep them entertained, 2. Provide them with a friend, 3. Give them someone to "talk" to that can understand what they're saying and speak the same language, 4. Provide a herd. Single pigs are known to have behavior issues. Sometimes its due to boredom, sometimes its due to just being a jerk pig, but sometimes its because they need a friend. Many pig behavioral consultants will ask you, "how many pigs do you have?" That is because one of their suggestions will likely be to add another pig if you only have one and are consulting with someone about behavioral issues.

Introductions need to be done slowly....with a barrier. One pig in one area and one pig in another with a baby gate or some kind of barrier in between them. They need to be able to communicate and get their frustrations/aggressions out prior to meeting face to face. You may see them run along the side of the barrier beside each other, this may or may not be accompanied by frothing mouths, a distinct "chomping" sound and/or a raised mohawk. Most pigs will always walk little sideways, almost like a side-step. One pig may be super interested in the other, while the new pig may be laid back, or vice-versa. Typically, both pigs are eager to meet each other, so be sure your fencing/barrier is strong enough to handle the potential fighting that may ensue even with a barrier. These pigs may head-swipe the gate/barrier, they may become quite vocal with each other, or they could be very quiet and simply follow the other pig around whenever this may may go. Until your pig sees, hears or smells another pig, they typically have no reaction...however, as soon as your pig knows there is another pig? You typically see a reaction and this may provoke the more laid back pig to respond as well. There are times when your normally docile pig starts acting out towards you too. My best educated guess is that it's done out of jealousy, maybe confusion. Likely this behavioral outburst is attributed to "I can't believe you actually brought another pig into MY house" sort of attitude. Your pig needs to know this is unacceptable behavior and there should be repercussions for that negative behavior, but usually, these outbursts gradually slow and stop once the pigs are acquainted.

Once the side stepping and chomping subside, it's at that point that they're probably ready for face to face (or snout to snout) introductions. This can take 3 days or it could be 3 weeks. They will likely fight. They're herd animals, they have a herd mentality and have to battle it out to see who will get the top hog position. It's a way of life for them. Always try to minimize the fighting though. I will intervene if needed, some are against getting in between them regardless, but I find that to be cruel and unnecessary. They will bite, scratch and toss each other, and you need to determine when it's enough, but I wouldn't allow any to be injured. You may end up with some bumps and bruises, my pig had her ear torn during an introduction to a stranger pig even though I was literally standing there to referee. It may surprise you when you see it unfold, a much bigger pig may not be willing to fight and may actually try to just run away from a smaller pig. You will see in the following video, the larger of the two pigs basically tries to "ignore" the newer pig, however, the little guy refuses to be ignored and follows the larger pig around the yard. Both pigs are neutered and as you will hear, both can be quite vocal as well. JD, the bigger pig in the following video, decided to run from the new guy whose name is Charlie.
(Thanks to Joseph and Megan Smith for the videos)
Vaseline can be rubbed on the ears, back, tail and face and typically helps so they're not able to get a good grip, also, switching out beds or blankets so they can get used to each others scent can be helpful. Just make sure the new pig is free from disease, ensure whichever is bigger and older doesn't have an unfair advantage like protruding tusks that can harm the smaller or defensiveness one. Get all vet records and if you're getting from out of state, make sure you have a health certificate that accompanies your newest addition to protect both of them should you need it. Ensure they have enough room to move or run away from the other and a safe place to go should they want to just hide, so do NOT introduce them for the first time in a small room or flooring they will slip on, be sure they're on the grass or a floor that isn't slippery, having a pig slip and fall can result in an injury. Introductions need to take place in an area that has plenty of space, ideally, there will be an area where the smaller pig can run and hide. Let me add, if one or both pigs arent "altered" meaning spayed or neutered, they will breed regardless of whether theyre brother or sister, mama and son, father and daughter, etc. They will/can breed much earlier than you probaby think....(boys can still impregnate a female for several weeks after being neutered until the sperm counts are zero)
This is "pig chatter" that you may hear when introducing a new pig to your current pig(s). This is Max with Charlie. (Charlie is the smaller of the two and the newest addition to the Smith household)
Not all pigs will fit into any of these scenarios, some are extremely docile and don't fight at all, some will always bicker and fight, others will fight for a few days and be the best of friends afterwards. Some will relinquish all rights to the new pig, some will not. Some will never accept a new pig into the home. Each pig has a unique personality and you really don't know how it will turn out until they're introduced. Pigs in much larger groups, such as a rescue, will likely have a "family" they like to socialize with, pigs do that, they pick the ones they like the best and stick to that group. Each group has a leader and occasionally, they will test the herd order to be sure their leader still deserves that spot.

Here are other pig introduction examples for your reference.
http://youtu.be/XwVxujf4Ehc (The first Elaine West, who runs a pig sanctuary, uploaded and it probably the best example of pigs fighting for the top spot.)
http://youtu.be/-NwclrwZrNs (2 pigs meeting and fighting)
http://youtu.be/tgg_CK3JJyw (An example of pigs fighting for the "top spot")
A special thank you to Kelly Gonyer for sharing her pig to pig introduction with a barrier video with us to use on the website. This is what you can expect to see in pigs when they first meet.

This is also a great example of how this should be done, using a stable barrier between the two so they can chomp and froth and mirror each other, as pigs do when they're upset and wanting to challenge one another. Once this behavior subsides and they are no longer chasing each other down the fence line, not chomping or charging...then they're ready to meet without a barrier. Sometimes it takes days, sometimes it takes weeks or months before a pig has calmed down enough to accept a new friend. Each situation will be different, but you should notice steady progress from both sides. When you do decide to allow face to face introductions without a barrier, make sure you do it in an area where the less dominant pig can run away. Do not do this indoors or on slippery surfaces. They need room to move around and an opportunity for one to walk away and concede. ​
Also, I see a lot of posts about piggy play dates....I am personally not a fan of this. As you can see, pigs take some time to be introduced, unless this is going to be a permanent or semi-permanent situation, I wouldn't want to stress out my pig just to have her around another pig for a few hours. Combine that with potential spread of diseases, illnesses or parasites, and that really makes it tough to support piggy play dates. These pigs may not even show signs of these illnesses but could be carriers and direct contact with your pig could lead to exposing your pig to the disease/illness. There are always exceptions, if you and a close friend both have pigs that will frequently see eachother, introducing them may not be a bad idea. . Even when traveling to someone else's home who has pigs, I bring a change of clothes so that I don't expose my pig to unnecessary germs or potential infectious issues. Not that I dont trust those I go see, but why risk it? That is obviously my personal opinion on the matter, to each his own, but please take these things into consideration when making plans for piggy play dates. Meeting another pig is extremely stressful. Factor in possibilities like dippity pig syndrome, which os typically brought on by stress, such as a change in routine or being introduced to a new pig. Although dippity pig syndrome looks much scarier than it actually is, this is something that can be brought on by placing your pig in an unnecessary stressful situation.

Before allowing a new pig to be introduced to your current pig, these are suggestions you should keep in mind before allowing your pig access to another pig. Ideally the best standard is keeping pigs separated for a "quarantine" phase to be sure it's safe to introduce them, but we all know this doesn't always work as planned.

Four day old piglets fighting with each other

These are 4 day old piglets fighting amongst each other to determine who the top hog will be. This is natural for siblings to fight in order to determine who will get the best producing teat and be the leader in that group. Special thanks to Cindy V. for letting me use her video.
In the video above, Shelia Pitrucha videos 2 bickering piglets. Thus right has nothing to do with trying to get the best milk producing teat, but does demonstrate how piglets "play" as well as how they establish dominance. 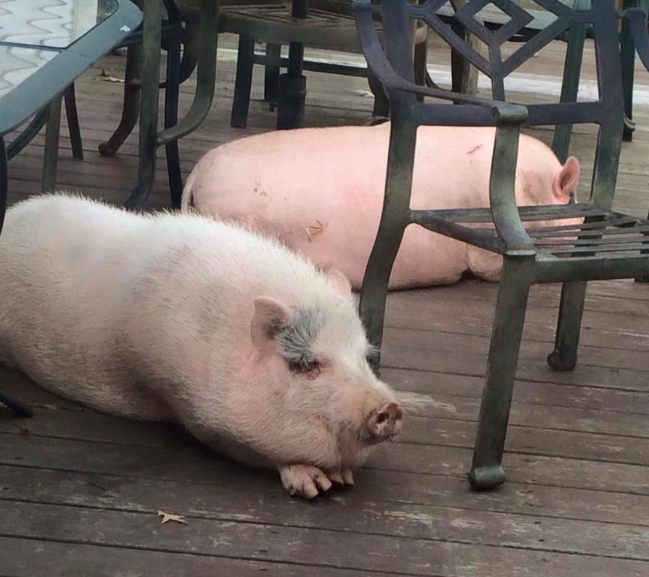