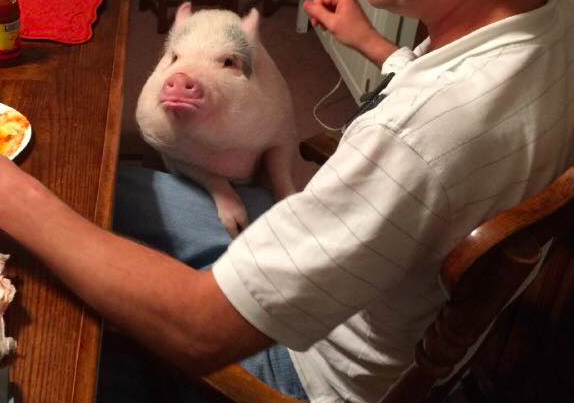 This should NOT be allowed. This is how food aggression starts.

If your pig is having food aggression issues, there are a few things you can do to stop that behavior.  Be proactive, if you don't start something, you never have to stop. Don't feed your pig from the table. Don't give your pig people food. Don't expect your pig ignore food around them. You've heard the expression, "stop being a pig", this is where it came from. Pigs love food. They don't care if its not good for them, they don't know food they shouldn't have, all they smell is something they want to sample and sometimes, when that want isn't fulfilled, they will get angry and start to have food aggression problems. Sometimes we give a treat because a pig is squealing or because we are eating and they cant have any of your food. This is a reward for bad behavior and only reinforces the behavior as a way to get something they want.

My pig was well behaved for the actual treat, but, once there were no more treats to give, if you left your hand near her face, she would either bite your hand or headswipe in order to let you know she wasn't happy. There were times she would stalk you just to show you she was displeased and throw her snout into your leg. My pig would stand right at my feet when it was meal time and keep attempting to lift my feet up with her nose, kind of telling me to hurry up and make her food. This is unacceptable behavior. First thing. Quit hand feeding ALL food and treats. The sooner she realizes that she doesn't get something from your hands, the quicker it will work. I actually had to quit giving treats altogether my pig got so bad. Also, in addition to putting treats in a bowl or on the ground, don't give her any food unless she earns it. Even meals. Don't let your pig stand at your feet in an attempt to rush you to finish making the meal for them. Remove them from the kitchen or area where you prepare the meal for them. Make her sit or stay or back up, sit, spin or shake hooves, but make sure your pig knows he/she has to do what you say before you give them food, but don't just "give" him/her any kind of award for misbehaving. Once it gets bad, it takes some time to fix it, so don't expect this to change overnight, it's a process. If she should bite, you need to hold the snout and say "NO BITE" or "NO BITING" and walk away. Time outs work sometimes too, but mainly it's the association with you, your family, y'all's hands and food. So feed her on YOUR schedule, not the one your pig dictates.

I would put him/her outside or in another room when there is food involved. Crated even. My pig was exactly the same way. And it took me a good year of her acting like that before I fixed it or even really figured out what she was going for. She will still beg for food, but I REFUSE to give her any. She can throw all the tantrums she wants, she isn’t getting anything that we are eating. Get a sorting board. Put that there so the if the pig lunges or charges, he/she has a barrier so they can’t hurt anyone or actually get to you. It's going to take some time to break the habit. It didn't develop overnight and it won't go away overnight either. Your pig is not the boss, you and your family are. So everyone has to be active in correcting the behavior. If only you are, he/she will only respect you and no one else. The sorting board is the best purchase I ever made to be honest, it provides me with the security knowing that if my pig has this aggressive attitude, it’s a safe way to control what she does and also allows me to use it to put her in a safe place.

Many pet pigs quickly learn to use threatening behavior to get what they want. This can become extremely dangerous if the pig is allowed to play unsupervised with small children. Many children find it entertaining to feed pigs and may be at risk of being bitten simply because their hands smell like food. Although a bite that happens in a situation like this may be perceived as an accident on the pig's part, the pig's behavior is likely to be reinforced because the child may drop whatever food it is carrying when frightened. Children are also very likely to retreat from a location when threatened by a pig. When this happens, the pig's behavior is again reinforced and the pig, possibly believing that it is the dominant member of its human herd, becomes more likely to behave aggressively when someone attempts to make it do anything that it does not want to do.

Just remember, your patience with him will pay off eventually. My pig will still break into cabinets or the fridge if given the opportunity, but because I know she's a troublemaker, she is crated when inside unless I am downstairs with her, otherwise, she is outside digging for treasures.

I would only feed him or her outside, not in the house. Do everything you can to keep him out of the kitchen or dining room until you have it under control. Use baby gates or whatever you have to so he/she isn't the one controlling the situation. It's YOUR house, YOU make the rules. If he/she breaks the rules, he/she needs consequences. Time outs work, other have used a spray bottle with water and would spray the pig when he/she would charge or bite someone because they wouldn't give her food.  Removing your pig from the situation to begin with saves the pain of having to punish for breaking the rules. It got really bad at my house. Pretty soon it wasn't just about food, she just progressed into being an aggressive pig. All of it was my own fault, I thought it was cute when she was young, but what's cute at 10 lbs isn't cute at 100 lbs.

When we eat? My pig is crated or outside. I won't listen to the whining and treats are MY choice to give them, not the other way around. Treats are special and need to be earned. I won't even feed them until they do a trick or back up on command like 4-5 steps. Your pig may not appreciate these methods at first, but don’t let that stop you from taking control. YOU are the boss, YOU are the herd leader, YOU have to stop it.

The pictures at the end of this article are the sorting panels or sorting boards. Depending on your pigs size, you may be able to buy the smaller one. The big one was only 29.00 on Hogslats.com. The smaller one was SIXTY dollars off Amazon and I was NOT happy when it arrived because it wasn't the size of the one they had pictured. (The bigger one should have squared measurements like 30x30, the rectangular one-smaller one, will have measurements like 19x30)

Is your pig getting enough pig food to satisfy their appetite? I've also seen some pigs get food aggressive because they're actually starving. They're hungry and mad because their little belly’s aren't full. Maybe increasing the feed may help. How much do you think you pig  weighs? Look at your pig, are the hip bones sticking out? I will tell you this, if his hip bones are showing or even easy to feel, he may he need a little more feed. Their food needs to balance the amount of energy they put out. One of my pigs gets 1/4 cup and 1/4 veggies twice a day for a total of 1/2 cup twice a day. She's fat and lazy. My other super active pig gets 1 cup twice a day with veggies because he's running and playing all day where as buttercup lays around. which is more like 1 1/2 cup twice a day when added together. So you may need to slightly adjust his diet or add in foods that make him feel fuller longer like oatmeal or roughage like green leafy veggies.

Is this your only pig? I asked if he was the only pig because believe it or not, having 2 pigs, even when one is a jerk, does help too most times. Then the herd dynamics change and one of them is the leader and the other is the follower. They often teach each other manners. If he/she is the only pig, yall are his herd. Someone has to be the leader and if yall aren't claiming that spot, he will. You have to show him you're not going to take his crap (sorry for the unprofessional word, but it's the most appropriate one for this kind of situation) I know, I've been there. It's frustrating but it can be corrected. I promise you. My big girl doesn't do it anymore. Not once I decided I was going to make a change for her wellbeing. She didn't get as far as she is was on her own, we all helped her get there. Sometimes a pig just needs to stay busy in other ways. Treat dispensers are great. Fill it with pellets or Cheerios and let him push that around so he's rewarded for his exercise, scatter his food on the ground outside, because let's face it, a pig eats so fast, their brain doesn't have enough time to send the stomach a signal that it's full, that's why they are sometimes called bottomless pits. Eventually they will walk away when they're full but usually, it takes some time. Forcing your pig to eat slower allows the brain to send the signal and allows enough time for the belly to receive it. But NO MORE TABLE FOOD! No ifs, ands, or buts about it. If you can, feed him outside at the same time yall are eating. Removing him from the area yall are eating will obviously do the trick for now, don't let your pig boss you or your family around though. It's YOUR house, take control. But make sure NO ONE gives in and gives him anything other than what is on the schedule to eat that day. NOTHING extra for now. When I quit giving treats altogether, after 2 weeks, my pig stopped acting like a fool. I slowly reintroduced "extras/treats" into our routine though. I literally gave mine zero Cheerios, zero peanuts, no ice, nothing. And I still don't give her anything by hand. They associate the hand with food and that's how the aggression starts. These tips should give you a great start to help your pig with the food aggression but each pig will react differently and you may need to adjust things to meet your needs specifically. This is just my experience with food aggression and how I corrected it in my pig. use some of the ideas, try them all, try a couple with your own ideas, not everything will work for each person, but some of it may. Don't give up though, if none of this works, reach out to us and maybe we can brainstorm other ideas to help you sort through your situation and determine the root of the problem and go from there. 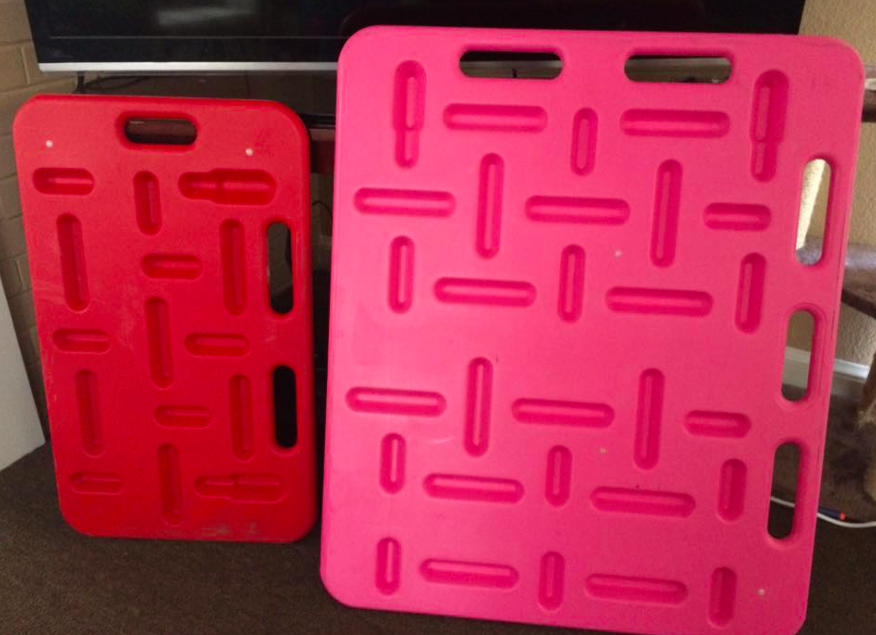 These are sorting boards or sorting panels
A new approach to working with a "spoiled pig" usually as a result of food aggression. Positively pigs is working on a series of videos to help guide you through some of the most common pig problems.
Next Page